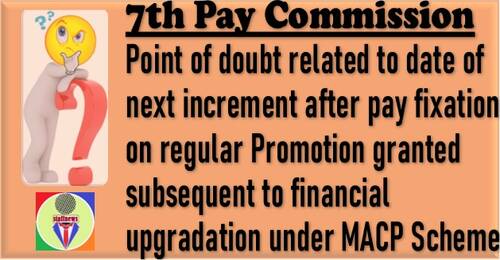 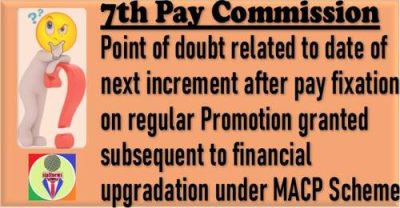 Subject: Point of doubt related to date of next increment after pay fixation on regular Promotion granted subsequent to financial upgradation under MACP Scheme.

“….. Ministry of Defence is informed that the genesis of the OM dated 28.11.2019 is the OM issued on 31.07.2018 which clearly provides that benefit of increment after completion of 6 months of service is to be given where fixation of pay is done in accordance with Rule 13 of CCS(RP) Rules 2016 on account of promotion or financial upgradation. However, at the time of regular promotion of the Government servant, pay has been fixed as per the provisions contained in Department of Personnel & Training’s OM dated 22.10.2019 which provides that pay fixed in the higher level of the Pay Matrix on account of promotion taking place after grant of MACP is merely done by placing the pay at a Cell equal to the figure being currently drawn or to the immediate higher Cell, if equal Cell is not available. In other words, the pay at the time of promotion is not fixed in terms of Rule 13 of the CCS (RP) Rules, 2016 as no increment is being given on such promotion. Therefore, the benefit of this Department’s OM dated 31.07.2018 and 28.11.2019 is to be given where the pay fixation is done in accordance with Rule 13 of the CCS (RP) Rules 2016.”

2. All related cases (including the cases settled earlier) may be regulated accordingly.