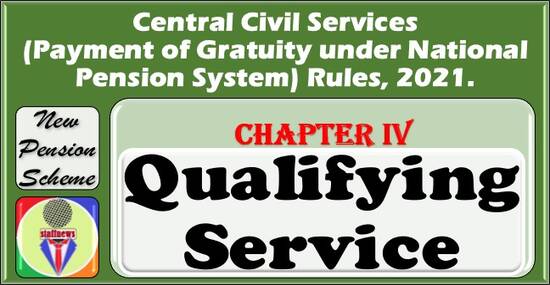 Form-1 CCS (NPS) Rules, 2021: Option to avail benefits in case of death/invalidation/disability during service
Scrapping of New Pension Scheme – Govt. is not in favour of the proposal, stated the benefit of NPS
Head of Accounts for Invalid Disability or Family Pension under National Pension System: CGA

8. Commencement of qualifying service. – Subject to the provisions of these rules, qualifying service of a Government servant shall commence from the date he takes charge of the post to which he is first appointed either substantively or in an officiating or temporary capacity :

Provided that officiating or temporary service is followed without interruption by substantive appointment in the same or another service or post.

9. Conditions subject to which service qualifies

10. Counting of service on probation

11. Counting of service as apprentice

12. Counting of periods spent on leave

(i) due to his inability to join or rejoin duty on account of civil commotion; or

(ii) for pursuing higher studies considered useful in discharge of the official duty of the Government servant.

13. Counting of periods spent on training

13. Counting of periods spent on training. – (1)The Government may, by order, decide whether the time spent by a Government servant under training immediately before appointment to a Group ‘A’ or Group ‘B’ post under that Government shall count as qualifying service.

(2) Time spent by a Government servant under training immediately before appointment to a Group ‘C’ post under the Government shall count as qualifying service.

(3) Group ‘C’ employees, who are required to undergo departmental training relating to jobs before they are put on regular employment, training period may be treated as qualifying service for gratuity, if the training is followed immediately by an appointment and the benefit shall be admissible to Group ‘C’ employees even if the officers concerned are not given the scale of pay of the post but only a nominal allowance.

14. Counting of periods of suspension

14. Counting of periods of suspension. – Time passed by a Government servant under suspension pending inquiry into conduct shall count as qualifying service where, on conclusion of such inquiry, he has been fully exonerated or a minor penalty is imposed on the Government servant or the suspension is held to be wholly unjustified; in other cases, the period of suspension shall not count unless the authority competent to pass orders under the rule governing such cases expressly declares at the time that it shall count to such extent as the Competent Authority may declare.

15. Forfeiture of service on dismissal or removal

16. Counting of past service on reinstatement

16. Counting of past service on reinstatement. – (1) A Government servant who is dismissed, removed or compulsorily retired from service, but is reinstated on appeal or review, is entitled to count his past service as qualifying service.

17. Forfeiture of service on resignation

17. Forfeiture of service on resignation. – (1) Resignation from a service or a post, unless it is allowed to be withdrawn in the public interest by the appointing authority, entails forfeiture of past service.

(2) A resignation shall not entail forfeiture of past service if it has been submitted to take up, with proper permission, another appointment, whether temporary or permanent, under the Government where service qualifies.

(3) Interruption in service in a case falling under sub-rule (2), due to the two appointments being at different stations, not exceeding the joining time permissible under the rules of transfer, shall be covered by grant of leave of any kind due to the Government servant on the date of relief or by formal condonation by present organisation to the extent to which the period is not covered by leave due to him.

(4) Where an order is passed by the appointing authority under Central Civil Services (Implementation of National Pension System ) Rules, 2021, allowing a person to withdraw his resignation and to resume duty, the order shall be deemed to include the condonation of interruption in service but the period of interruption shall not count as qualifying service.

(5) A resignation submitted for the purpose of rule 32 shall not entail forfeiture of past service under the Government.

18. Effect of interruption in service

18. Effect of interruption in service. – (1) An interruption in the service of a Government servant entails forfeiture of his past service, except in the following cases, namely :-

(a) authorised leave of absence ;

(b) unauthorised absence in continuation of authorised leave of absence so long as the post of absentee is not filled substantively ;

(c) suspension, where it is immediately followed by reinstatement, whether in the same or a different post, or where the Government servant dies or is permitted to retire or is retired on attaining the age of compulsory retirement while under suspension ;

(d) transfer to non-qualifying service in an establishment under the control of the Government if such transfer has been ordered by a competent authority in the public interest ; (e) joining time while on transfer from one post to another.

(2) Notwithstanding anything contained in sub-rule (1), the appointing authority may, by order, commute retrospectively the periods of absence without leave as extraordinary leave.

19. Condonation of interruption in service

19. Condonation of interruption in service. – (1) In the absence of a specific indication to the contrary in the service book, an interruption between two spells of civil service rendered by a Government servant under Government including civil service rendered and paid out of Defence Services Estimates or Railway Estimates shall be treated as automatically condoned and the pre-interruption service treated as qualifying service.

(2) Nothing in sub-rule (1) shall apply to interruption caused by resignation, dismissal or removal from service or for participation in a strike.

(3) The period of interruption referred to in sub-rule (1) shall not count as qualifying service.

20. Period of deputation. – Service rendered by a Government servant on foreign service in India or abroad or on deputation to United Nations or other International organisations shall count as qualifying service for gratuity provided contributions in respect of gratuity have been deposited for the said period either by the Government servant himself or by the foreign employer.

Explanation.- For the purposes of this rule, the rate of contribution for counting of period as qualifying service for the purpose of grant of gratuity shall be regulated in accordance with the instructions issued by the Department of Personnel and Training from time to time.

21. Verification of qualifying service after eighteen years’ service and five years before retirement

(2) Notwithstanding anything contained in sub-rule (1), where a Government servant is transferred to another Department from a temporary Department or on account of the closure of the Department he had been previously serving or because the post he held had been declared surplus, the verification of his service may be done whenever such event occurs.

(3) The verification done under sub-rules (1) and (2) shall be treated as final and shall not be reopened except when necessitated by a subsequent change in the rules and orders governing the conditions under which the service qualifies for gratuity. 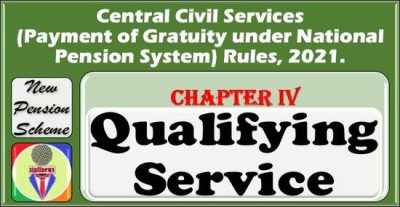