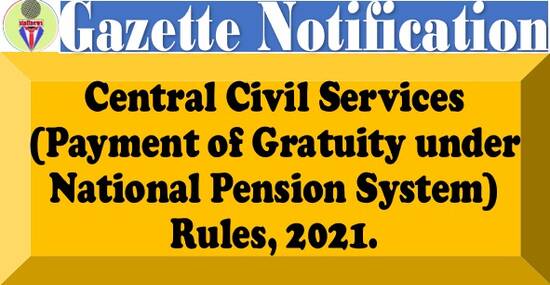 G.S.R. 658(E). – In exercise of the powers conferred by the proviso to article 309 and clause (5) of article 148 of the Constitution and after consultation with the Comptroller and Auditor-General of India in relation to persons serving in the Indian Audit and Accounts Department, the President hereby makes the following rules, namely:-

1. Short title and commencement.- (1) These rules may be called the Central Civil Services (Payment of Gratuity under National Pension System) Rules, 2021.

2. Application.- Save as otherwise provided in these rules, these rules shall apply to the Government servants including civilian Government servants in the Defence Services, appointed substantively to civil services and posts in connection with the affairs of the Union on or after the 1st day of January 2004, and to whom the Central Civil Services (Implementation of National Pension System) Rules, 2021 apply :

3. Definitions. – In these rules, unless the context otherwise requires, –
(1) (a) ‘Accounts Officer’ means an officer, whatever his official designation, of a Ministry or Department functioning under the scheme of departmentalisation of accounts, who, inter-alia is responsible for receipts, payments, Internal Audit and accounting functions of an office or Department or Ministry of the Central Government or Union territory and includes officers subordinate to the Accountant General who is entrusted with the function of maintaining the accounts or part of accounts of the Central Government or Union territory;

(b) ‘allottee’ means a Government servant to whom Government accommodation has been allotted on payment of license fee or otherwise ;

(e) ‘Form’ means a Form appended to these rules ;

(i) ‘Minor’ means a person who has not completed the age of eighteen years ;

(j) ‘Qualifying service’ means the service rendered while on duty or otherwise which shall be taken into account for the purpose of payment of gratuity admissible under these rules;

(2) Words and expressions used herein and not defined but defined in the Fundamental Rules, 1922 or the Central Civil Services ( Implementation of National Pension System) Rules, 2021 shall have the meanings as respectively assigned to them in those rules.

CHAPTER VI – Determination and authorisation of the amount of gratuity

56. Currency in which gratuity is payable.– The gratuity admissible under these rules shall be payable in rupees in India only.

57. Manner of payment of gratuity.- Except as otherwise provided in these rules, a gratuity shall be paid in lump sum.

58. Application of Treasury rules.– Save as otherwise provided in these rules, the Treasury Rules of the Central Government shall apply in regard to the procedure of payment of gratuity.

59. Interpretation.– Where any doubt arises as to the interpretation of these rules, it shall be referred to the
Government in the Department of Pension and Pensioners’ Welfare for decision.

60. Power to relax.– Where any Ministry or Department of the Government is satisfied that the operation of any of these rules causes undue hardship in any particular case, the Ministry or Department, as the case may be, may, by order for reasons to be recorded in writing, dispense with or relax the requirements of that rule to such extent and subject to such exceptions and conditions as it may consider necessary for dealing with the case in a just and equitable manner :
Provided that no such order shall be made except with the concurrence of the Department of Pension and Pensioners’
Welfare.

61. Residuary provisions.– (1) Any related issues not specifically covered in these rules, shall be decided in terms of the relevant provisions in this regard contained in the Central Civil Service (Implementation of National Pension System) Rules, 2021, Fundamental Rules, 1922 or any general or special order issued by the Government provided it is not repugnant to or inconsistent with the provisions of these rules.

62. Repeal and saving. – On the commencement of these rules, every order, instruction or Office Memorandum in force immediately before such commencement shall, in so far as it provides for any of the matters contained in these rules, cease to operate and anything done or any action taken under those order, instruction or Office Memorandum shall be deemed to have been taken under the corresponding provisions of these rules.

FORM 1 – Certificate of verification of Service for Gratuity

FORM 8 – Letter to the nominee/ member of family

FORM 9 – Application for the Grant of Death Gratuity

Form 10 – Assessment and Authorisation of Payment of Death Gratuity

PROFORMA-B Indemnity Bond – In the case of missing employee 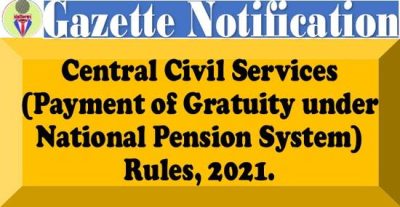