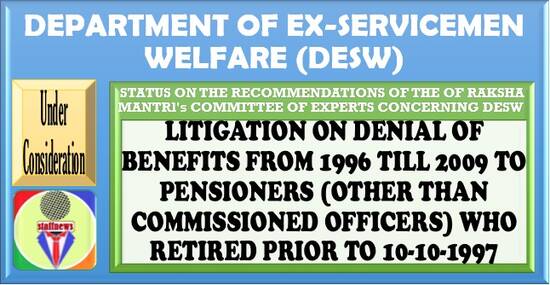 Litigation on denial of benefits from 1996 till 2009 to pensioners (other than Commissioned Officers) who retired prior to 10.10.1997

Litigation on denial of benefits from 1996 till 2009 to pensioners (other than Commissioned Officers) who retired prior to 10.10.1997: Status on the recommendations of the Raksha Mantri Committee

The Committee recommends the following on the above subject:

(a) The fresh scales introduced with effect from 10-10-1997 were bound to take effect from 01-01-1996 as per the gazette notification issued by the Govt of India which had the due approval of the Cabinet (Para 1(b) and 4 of Annexure-15). Any later executive instructions restricting the effect from 10-10- 1997 onwards is ·null and void in the face of the gazette notification and hence all litigation initiated on the said point (popularly known as jai Narayan fakhar’s case) is unethical and needs to be withdrawn, whether it comprises Review Applications in the AFT or in the High Courts or appeals in the Supreme Court since the issue specifically has been upheld by the Supreme Court injakhar and Bishnoi cases (supra).

(b) The above view is also fortified by various decisions of the Supreme Court in which it has been held that once an anomaly is removed, it needs to be removed from the date of its inception with full arrears from backdate and not an artificial future cut off date. Prominent amongst such decisions are KT Veerappa Vs State of Karnataka 2006 (9) SCC 406, Civil Appeal 1123/2015 State of Rajasthan Vs Mahendra Nath Sharma decided on 01- 07-2015 and Civil Appeal 8875/2011 Union of India Vs Sqn Ldr Vinod Kumar Jain decided on 17-03-2015.

(c) That even otherwise, whenever such anomaly has been removed from the scales of other classes of employees including civilians and commissioned officers, the said rectification in pension or pay and allowances has always taken effect from the date of implementation of recommendations of the pay commission, and not any future cut-off date. For example, when the new pay grade of Rs67000-79000 was implemented for Additional Secretaries to Govt of India and Lt Gens in 2009, it was implemented with effect from 01-01-2006 for pay and allowances purposes of serving officers and for pension calculation purposes for pre-2006 retirees whose pensions were now based on the freshly introduced scales of 2009 with financial effect from 01-01-2006. Similar is the case for all other ranks and grades. Hence, it makes no logic to treat lower ranks of the three defence services differently. Even the arrears in the “rank pay” case, after the decision of the Supreme Court, were granted to all officers recently with effect from 01-01-1986 with interest.

(d) Though we are not recommending promulgation of fresh policy in this regard since we are now at the cusp of the next pay commission, the litigation in the form of appeals and reviews pending before the Supreme Court, High Court and various Benches of AFT may be immediately withdrawn by the Ministry of Defence/Services HQ since it is not only unethical but also a burden on the exchequer as well as the litigants since the issue stands long settled by the Supreme Court and is covered by the Government’s own gazette notification. Pending/future cases be conceded on same lines by agreeing to grant of benefits from 01·01-1996 till 30·06·2009 without any restriction of arrears in light of the Gazette notification on the subject. 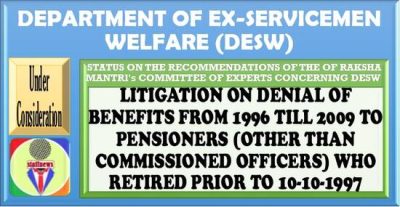 Loading...
Newer Post
Requirement of 10 months service in a particular rank to earn the pension of that rank
Older Post
Illegal denial of pension benefits to Pre-2006 Retiree Honorary Naib Subedars: Status on the recommendations of the Raksha Mantri Committee