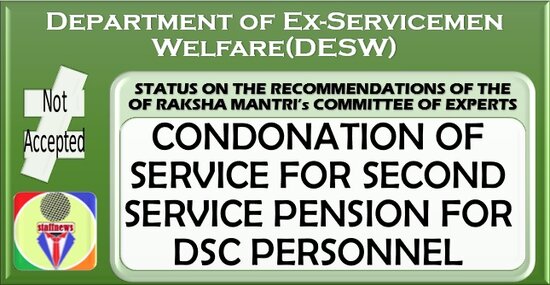 Condonation of Service for Second Service pension for DSC Personnel: Status on the recommendations of the Raksha Mantri Committee

Condonation of Service for Second Service pension for DSC Personnel: Status on the recommendations of the Raksha Mantri Committee DEPARTMENT OF EX-SE

Reservation Policy for Ex-Servicemen in Central Govt Ministries/Deptt, Banks, PSU & CPMFs – Designation of DGR as the Nodal Agency for monitoring
BSNL VRS-2019: Finalization of Format of SANCTION MEMO for final payment of Ex-Gratia and Encashment of EL / HPL in respect of retirees
Nomination of Liaison Officer for implementation of orders of reservations relating to Ex-Servicemen: DoP&T OM

Condonation of Service for Second Service pension for DSC Personnel: Status on the recommendations of the Raksha Mantri Committee

2.2.9 CONDONATION OF SERVICE FOR SECOND SERVICE PENSION FOR DSC PERSONNEL:

The Committee recommends the following on the issue:

(a) The Committee notes with concern that such a stand denying condonation of service for second pension is not only obdurate but also contemptuous since once an issue is decided by a Constitutional Court and accepted as such for many personnel and also the impugned letter read down or struck down by judicial interpretation, the DESW could not have issued another similar letter in 2012 with similar contentions to revalidate or negatively resuscitate a judicially settled If such a stand were to be accepted, then even after impugned letters or provisions are read down, interpreted or struck down, various departments of the Government would simply issue them again with a different date to revalidate their actions, something which is not acceptable in a democracy which has the rule of law as its hallmark.

(b) Even otherwise the reasons to deny such condonation cannot be invented when no such prohibition or reasons exist in the master regulations or letters of the Government, moreover when the second service by those DSC personnel who have not opted to add their former service in their DSC service is totally separate and divorced from their earlier service with no connection whatsoever with their former service or financial Defence personnel who are joining the DSC cannot be placed at a disadvantage than their peers joining civil Government organisations who become eligible for pension after 10 years.

(c) All appeals filed on the subject or in the pipeline may be withdrawn. The fresh letter issued by the DESW in the year 2012 merely reiterating the earlier letter of 1962 hence also needs to be withdrawn or directed to be ignored and status quo ante as accepted by judgements (supra) needs to be accepted since now it is the law of the land. Matters be conceded on a case to case basis, as was the practice earlier.

3. The issue was earlier considered in view of few AFT judgements wherein directions were given for condonation of deficiency in service for the purpose of granting 2nd service It was decided in a meeting held between Secretary (ESW) and AG on 06.02.2012 that the position would be examined and clarified.

4. CGDA to whom the matter was referred for their views/comments, had stated that condonation of deficiency in Q.S for grant of service pension is to be granted only on merit and in deserving cases to make individual eligible for at least one pension, however in the instant case, the individual is already drawing pension from his 1st service therefore grant of condonation for deficiency of service for 2nd spell has no merit. CGDA has further stated that, it is also pointed out that prior to 6th CPC, element of weightage was not allowed to DSC personnel for grant of 2nd pension on the analogy that no dual benefit shall be allowed on same accord hence  on similar lines the proposal for condonation deficiency in service for grant of 2nd service pension in respect of DSC personnel has no merit.

5. It was conveyed to Service Hqrs with the approval of Secretary(ESW) vide letter dated 23.04.2012 that the intention behind grant of condonation for deficiency of service for grant of service pension is that the individual must not be left high & dry but should be made eligible for at least one pension. On the principle that no dual benefit shall be allowed on same accord, it was clarified that no condonation shall be allowed for grant of 2nd service pension. The matter regarding condonation of shortfall in service towards second service pension in respect of Defence Security Corps (DSC) personnel was examined in DESW in consultation with CGDA and MoD (Fin/Pen) and with the approval of the then Hon’ble Raksha Mantri Govt. letter No. 14(2)/2011)/D(Pen/Pol) dated 20.07.2017 has been issued vide which it has been clarified that condonation of deficiency in service is not applicable in the case of second service pension for the service rendered by personnel in DSC.

Hon’ble Supreme Court (SC) in its recent orders dated 27.8.2018 in Civil Appeal No. 27934/2018 filed in the matter of Smt. Veda Devi Vs UoI & Ors. Have dismissed the SLP on the ground of delay. The Hon’ble Supreme Court vide its order dated 27.8.2018 in Civil Appeal No. 27100/2018 in the matter of Ex. Naik Mohanan T have also allowed such condonation. However, both the orders are case specific and condonation has been allowed to the two individuals who approached the courts. The Hon’ble Supreme Court has not struck down the DESW said letter and has kept the law point open. 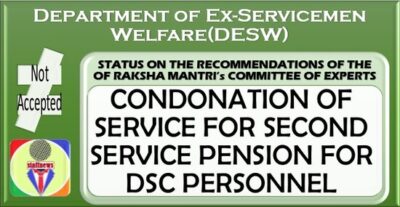 Procedure for filling up of Ex-cadre Group ‘B’ post of Protocol Officer : Railway Board RBE No. 36/2022