Broad-banding of Disability percentages for the computation of Disability element and War Injury element: Status on the recommendations of the Raksha Mantri Committee

Broad-banding of Disability percentages for the computation of Disability element and War Injury element: Status on the recommendations of the Raksha Mantri Committee

The Committee recommends that the principle of broad banding of disability percentages, irrespective of the manner of exit, be extended to all disability pensioners of the defence services as already settled by the Hon’ble Three Judge Bench of the Supreme Court in Civil Appeal 418/2012 Union of India Vs Ram Avtar decided on 10-12-2014, with financial effect from 01-01-1996 or date of release from service or date of grant of disability/war injury pension, whichever is later. Till the time such policy is issued, Government lawyers should be strictly instructed to concede such cases in Courts since continuance of defence of such cases in view of the settled position is not only contemptuous but is also resulting to a loss of both the exchequer/Union of India as well as litigants. Appeals, if pending, may be immediately withdrawn.

Consequent upon the acceptance of the recommendations of the 5th CPC, a policy letter dated 31.01.2001 was issued by the Govt. admitting Broad-banding of Disability in respect of invalidated out Armed Forces Personnel w.e.f. 01.01.1996. 5th CPC had mentioned that where it is not feasible to retain disabled personnel and are boarded out of service due to disability attributable to or aggravated by service be granted benefit of broad banding.

7th CPC vide Recommendation para 10.2.57, has recommended the broad banding of disability for all personnel retiring with disability, including premature cases/voluntary retirement cases for disability greater than 20%. Govt. letter for implementation of 7th CPC recommendation in the matter has been issued on 4.9.2017 & 5.9.2017.

The matter regarding extending the benefits of broad-banding of percentage of disability with financial effect w.e.f. 01.01.1996 or date of release from service or date of grant  of disability/war injury pension whichever is later in respect of other than invalided out cases, is subjudice in Hon’ble Supreme Court. 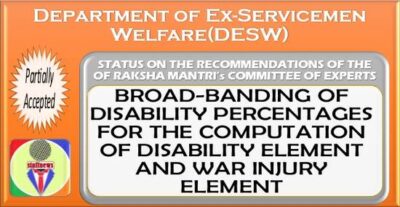