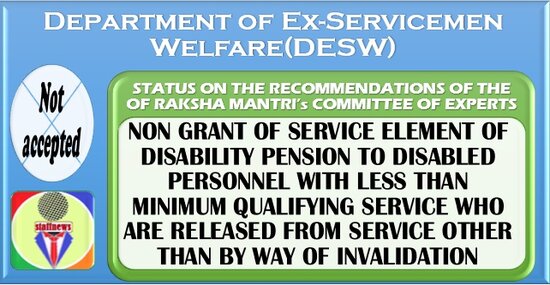 Non grant of Service Element of Disability Pension to Disabled Personnel with less than Minimum Qualifying Service: Status on the recommendations of the Raksha Mantri Committee

Non grant of Service Element of Disability Pension to Disabled Personnel with less than Minimum Qualifying Service who are released from Service other than by way of invalidation: Status on the recommendations of the Raksha Mantri Committee

2.2.11 NON GRANT OF SERVICE ELEMENT OF DISABILITY PENSION TO DISABLED PERSONNEL WITH LESS THAN MINIMUM QUALIFYING SERVICE WHO ARE RELEASED FROM SERVICE OTHER THAN BY WAY OF INVALIDATION:

The Committee, in view of the foregoing, recommends that Service Element be released to all those individuals who are released with an attributable/aggravated disability, irrespective of the manner of exit/release from service since there is no minimum qualifying service required for earning this element. All appeals filed on the subject may be immediately withdrawn.

The issue was referred to office of CGDA for their comments. Comments received from CGDA vide their U.O dated 28.4.2017 reproduced as below:-

(i). As per Special Army Instruction 4/5/74, w.e.f 01.01.1973, there is no minimum service criterion for grant of service element of disability pension in invalided out cases. This benefit has been extended to Pre- 1973 invalided out pensioners vide GoI, MoD letter No. 12(28)/2010-D(Pen/Pol) dated 10.02.2014 circulated vide PCDA (P) Circular No. 527 dated 25.04.2014. However, in cases, where individual has been retained in service even after disability attributable to or aggravated by military service and subsequently discharged after fulfillment of term of engagement or at own request, 15 years of qualifying service is mandatory to earn service pension.

(ii). In case, where an individual is invalided out on medical ground being neither attributable to nor aggravated by military service, invalid pension is payable, provided, he has rendered 10 years or more but less than 15 years qualifying service. In the event of rendering 05 years or more but less than 10 years service, invalid gratuity is admissible. CGDA office is of the view that if an individual is retained on the basis of the recommendations of the Medical Board and subsequently opts for discharge from service, it may not be treated as invalided out from service and should be treated as discharged at own request.

(iv). As the provisions for minimum qualifying service to earn pensionary benefits have already been made (as laid down in respective Pension Regulations for the Army, Navy & Air Force as well as CCS Pension Rules for civilians) with due consideration, therefore, this office is of the view that minimum criteria of qualifying service, to earn service pension/invalid pension should not be shaken. Department of Pension & Pensioners’ Welfare may also be consulted in the matter since issue to civil servants/CPMF(Central Para Military Forces) pensioners also.

2. The Comments of DoP&PW to whom the matter was referred are as under:

Sub-Rule(2) of Rule 9 provides that if the Govt. Servant is boarded out of Government Service on account of his disablement, he shall be paid disability pension in accordance with the Rule.

(iii) Under CCS(Pension) Rules, minimum 10 years of service is required for earning pension. A civil servant can apply for voluntary retirement after 20 years of qualifying service and entitled for pension. Under Rule 38 of CCS(Pension ) Rules, Invalid pension is also available for any mental or bodily infirmity, which permanently incapacitates a Government servant for the service.

3. Regulation 50 of PRA, 1961 bars payment of Disability pension to Defence Forces personnel who sought voluntary retirement. On the recommendation of 6th CPC, MoD letter dated 29.09.2009 was issued under which Defence Forces Personnel who were retained in service despite disability (due to attributable to or aggravated by service) & foregone lump-sum compensation were allowed disability element/war injury element on their retirement whether voluntary or otherwise in addition to retiring/ service pension or gratuity as per their length of qualifying service. This provision was made for post 2006 retiree. Vide MoD order dated 19th May 2017, this provision has been extended for pre-2006 retirees also.

5. Since the CGDA does not support the proposal for grant of service element of disability pension in other than invalided out cases and no such provision exist in Civil side, the demand cannot be equated at par with those

Defence Forces Personnel who are invalided out with disability attributable to or aggravated by Military service. Further, this will encourage the tendency of proceeding on voluntary retirement/discharge at own request by the Defence Forces personnel and the Defence Forces, thereby, will lose trained and experienced defence personnel which also cause extra financial burden to the exchequer.

6. In view of above discussion, there appears to be no case for consideration of the proposal. 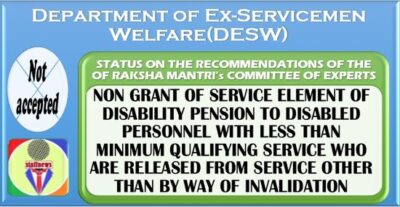