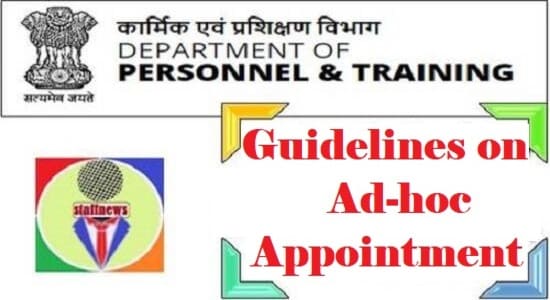 Note:- While due care has been taken to compile this document, however, if any omissions or correction are noticed, the same may be brought to the notice of the Department of Personnel & Training.

All posts are required to be filled in accordance with the prescribed procedure, in terms of the Recruitment Rules (RRs) and on a regular basis. However, at times, for reasons beyond the control of the Cadre Controlling Authority/Administrative Ministry/ Department, it may not be possible to make regular appointments/promotions in the normal course. While such posts should ideally be kept vacant till they can be filled on regular basis, in exceptional circumstances, where a post cannot be kept vacant for functional reasons/exigencies of work, or where ‘Deputation as an alternative method of recruitment has not been prescribed in the RRs, the post may be filled up on ad-hoc basis as the last resort. Thus, ad-hoc appointment/promotions are to be made in rare cases, in order to meet the functional requirement of the organisation while keeping the policy imperative that all posts have to be filled on regular basis. While making ad-hoc appointment/promotion, it may be noted that persons appointed on ad-hoc basis to a grade are to be replaced by persons approved for regular appointment by Direct Recruitment, promotion or deputation, as the case may be, at the earliest opportunity.

(b) Where short-time vacancies have arisen due to the regular incumbent having proceeded on leave for more than 45 days, or on short-term deputation, etc. (of less than one year) and the post cannot be kept vacant on functional grounds, the vacant post may be filled on ad-hoc basis.

(c) Where Direct Recruitment quota has not been filled and the RRs do not provide for filling it up by transfer on deputation temporarily, and if the post also cannot be kept vacant on functional grounds, the post may be filled on ad-hoc basis.

III. CIRCUMSTANCES WHERE AD-HOC APPOINTMENT/PROMOTION MAY NOT BE RESORTED TO

(a) ABSENCE OF RECRUITMENT RULES – Ad-hoc appointments are frequently resorted to on the grounds that Recruitment Rules (RR) for the post are in the process of being framed. In terms of DoPT O.M. No. 39021/5/83-Estt. (B) dated 09.07.1985 and OM No. AB 14017/79/2006- Estt.(RR) dated 06.09.2007, Ministries/Departments can make regular appointments in Group ‘A’ or Group ‘B’ posts under ‘One Time Method’ by making a reference to the Union Public Service Commission (UPSC) for deciding the method of recruitment to that post. Further action to fill the post may be taken according to the advice tendered by the UPSC. All such appointments will be treated as regular appointments. Further powers have been delegated to Ministries/Departments to frame/amendment Recruitment Rules for Group ‘C’ posts without consultation with DoPT. Such posts are in any case outside the purview of the UPSC. Therefore, no ad-hoc appointment may be made on the grounds that RRs for the post do not exist.

(b) REVISION OF RECRUITMENT RULES – Ad-hoc appointments are also frequently resorted to on the grounds that proposals are under consideration to amend the existing RRs. The legal position is that posts are required to be filled as per eligibility conditions prescribed in the rules in force at the time of occurrence of the vacancies, unless the amended RRs are brought into force with retrospective effect. In fact, the practice has been to give effect to the amendments in the recruitment rules only prospectively. Therefore, it is incumbent that appointment to a post is made strictly in accordance with the provisions of the RRs in force at the time when the vacancy arises. No ad-hoc appointment/promotion may be made on the grounds that RRs are being revised/ amended.

(i) Ad-hoc appointment/promotions are also made on the grounds that adequate number of qualified candidates has not been recommended by the recruiting agency (UPSC/SSC etc.) against the direct recruitment quota. In some cases, the candidates recommended by the SSC/UPSC do not join or they join only to resign thereafter, resulting in posts remaining unfilled. It has been provided in DoPT’s O.M. No. 39020/18/2016-Estt.(B)/3127101 dated 19.12.2016 that all Cadre Controlling Authorities are required to take advance action for reporting direct recruitment vacancies to the recruiting agency for timely filling up of these vacancies. Further, in terms of DoPT OM No.22011/4/2013-Estt(D) dated 08.05.2017, the Vacancy Year has been changed to calendar year wise with effect from 2019. Consequently, all Cadre Controlling Authorities are required to calculate vacancies falling under each method of recruitment i.e. promotion quota and direct recruitment quota for the entire vacancy year. It would therefore imply that the Cadre Controlling Authorities would correctly calculate all direct recruitment vacancies and thereafter report, all the vacancies so calculated falling under direct recruitment quota in a particular vacancy year, to the recruiting agency (UPSC/SSC) for selection. Hence, the occasion for continuation of ad-hoc promotion or for making fresh ad-hoc appointment/promotion should not arise, due to under reporting of direct recruitment vacancy.

(ii) Wherever feasible, posts may be allowed to remain vacant until qualified candidates become available at the next examination.

(a) Where ad-hoc appointment is by promotion from the feeder grade(s), only those officers who fulfil the eligibility conditions prescribed in the Recruitment Rules, should be considered for ad-hoc appointment/promotions and such appointment/promotion may be made only after proper screening of the records of the officer by the Selection Committee (in lieu of Departmental Promotion Committee) and acceptance by the Appointing Authority. If, however, there are no eligible officers, necessary relaxation should be obtained from the competent authority in exceptional circumstances.

(b) If the appointment proposed to be made on an ad-hoc basis involves the approval of the Appointments Committee of the Cabinet (ACC), prior approval of ACC may be obtained before making ad-hoc appointment/ promotion.

(d) No ad-hoc appointment shall be made from the open market. Where the vacant posts cannot be kept vacant for functional considerations, efforts may be made to entrust the additional charge of the post to a serving officer under provisions of FR-49, failing which only, appointment by ad- hoc promotion/ ad-hoc deputation may be considered.

(e) Further, Ministries/ Departments may desist from making ad-hoc deputation, till finalisation of the selection of candidate by the UPSC for appointment on deputation basis.

(g) The ad-hoc promotion of officials who are under Suspension or in respect of whom charge sheet has been issued and disciplinary proceedings are pending or in respect of whom prosecution for a criminal charge is pending shall be governed by instructions contained in DoPT’s OM No. 22011/4/91-Estt. (A) dated 14.9.1992 on ‘sealed cover’ procedure.

(i) The total period for which the appointment/promotion may be made by the respective Ministries / Departments on an ad hoc basis will be limited to one year only. The practice of giving a break periodically and re- appointing the same person on an ad-hoc basis may be strictly avoided. In case there are compulsions for extending the ad-hoc appointment/promotion beyond one year, the approval of DoPT would be required. Reference to DoPT in this regard may be made alongwith proper justification and detailed information as per the prescribed proforma circulated vide OM No. 28036/3/97-Estt.(D) dated 26.08.1997 at least two months in advance before the expiry of the one-year period. If the approval of DoPT to the continuance of the ad-hoc arrangements beyond one year is not received before the expiry of the one-year period the ad hoc appointment /promotion shall automatically cease on the expiry of the one-year term.

(j) For posts in Group ‘C’, the total period to make and continue ad-hoc appointment/promotion would be three years subject to fulfilment of all other norms.

(k) In terms of DoPT’s O.M. No. 39036/02/2007-Estt(B) dated 14.11.2008, Ministries/Departments are to comply with the regulation-4 of the UPSC (Exemption from Consultation) Regulations, 1958, which provide that if a temporary or officiating arrangement made by ad-hoc appointment to a post falling within the purview of UPSC is likely to continue for a period of more than one year from the date of appointment, the Commission shall immediately be consulted in regard to filling up of the post. Requisite monthly and six-monthly returns, in terms of DoPT’s OM No. 39021/1/94-Estt.(B) dated 22.07.1994, are to be submitted by the Ministries/Departments to the Commission showing all such Group ‘A’ and ’B’ Gazetted appointments and promotions made without reference to the Commission as per the time schedule prescribed so as to effectively monitor the ad-hoc appointments being resorted to by various Ministries/Departments without consulting the UPSC.