Kiran Kumari 1 May 12, 2017 11:30 am
Model Calendar for DPCs – Relevant year up to which APARs are to be considered and Model Calendar for conducting DPCs: DoPT Order
No. 2201 1/4/2013-Estt(D)
Government of India
Ministry of Personnel, Public Grievances and Pensions
(Department of Personnel and Training)
New Delhi,
8th May, 2017
OFFICE MEMORANDUM

The undersigned is directed to invite reference to the Department of Personnel and Training OM of even number dated 8th September, 1998 prescribing a ‘Model Calendar’ for DPCs in order to ensure that DPCs are convened in advance and approved select panels are ready on the date of commencement of the relevant vacancy year and that the last date for sending complete proposal to the UPSC is 15 July (in ACC cases) and 31 July (in non-ACC cases) of the year preceding the vacancy year.
2. Reference is further invited to the Department of Personnel and Training OM of even number dated 16th June, 2000 wherein it was prescribed/clarified that only such ACRs (now APARs) should be considered which became available during the year immediately preceding the vacancy/panel year irrespective of the date of convening of the DPC. In other words, for the vacancy/panel year 2000-01, it was prescribed that ACRs (now APARs) up to the year 1998-99 (five years preceding T-1st year) are required to be considered. Accordingly, for the vacancy year 2017-18, APARs up to the year 2015-16 are required to be considered.
3. Reference is also invited to the Department of Personnel and Training OM No. 22011/1/2005- Estt(A)-(Pt-II) dated 23rd July, 2009 on the subject ‘Preparation and Maintenance of APARs’ wherein a time schedule for preparation/completion of APAR has been prescribed. As per this schedule, entire APAR process is to be completed by 30th November of the year following the completion of time period of APAR year.
4. As per the extant instructions, say for vacancy year 2017-18, complete proposal to the UPSC has to be sent by 15 July, 2016 (in ACC cases) and 31 July, 2016 (in non-ACC cases) with APARs up to the year 2015-16. However, the entire process of recording APAR for the year 2015-16 is complete by 30th November, 2016 only. After the issue of guidelines regarding time schedule for completion of APAR, the time lines make it practically impossible to make the last APAR (the APAR of the year immediately preceding T-1th year) available for DPCs, i.e., the APAR for the year 2015-16 does not attain finality and thus may not be available before sending proposal for DPC for vacancy year 2017-18. in this background, the instructions regarding the procedure for convening DPCs have been reviewed in consultation with UPSC.
5. In order to streamline the process of timely convening of DPCs, it has been now decided that henceforth, the following changes may be effected in the DPC procedure in partial modification of this Department OM No. 22011/5/86-Estt.(D) dated 10.4.89, OM No. 22011/9/98-Estt.(D) dated 16.65.2000, OM No. 22011/9/98-Estt.(D) dated 8.9.98 and OM No. 22011/6/2013- Estt.(D) dated 28.5.2014(crucial date of eligibility):
(i) The vacancy year may be shifted to Calendar Year from the year 2018 onwards, wherever the financial year based vacancy year being followed now.
(ii) The crucial date of eligibility will be 1st of January of the Vacancy year w.e.f 2019.
(iii) The APARs for five years preceding T-2nd year may be taken as reckoning APARs, i.e. for the vacancy year 2019 (January 2019 to December, 2019), the reckoning APARs shall be 2016-17, 2015-16, 2014-15, 2013-14 and 2012-13.
(iv) The year of 2018 being the transitional year, the vacancy period shall be from 1st April 2018 to 31st December, 2018. The reckoning APARs for this vacancy year shall be 2015-16, 2014-15, 2013-14, 2012-13 and 2011-12. The crucial date of eligibility shall be 1st April, 2018 for the transitional year
6. Ministries/Departments are requested to give wide circulation to these instructions for guidance in the matter and also to ensure strict adherence to the time-schedule prescribed as per the ‘Model Calendar’ for DPCs. 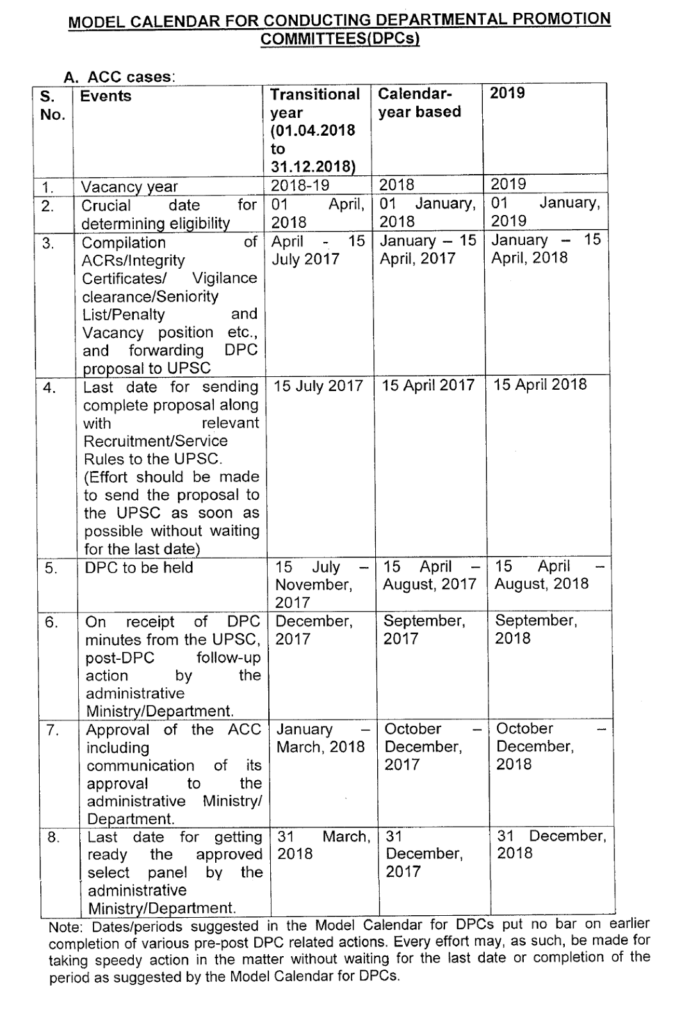 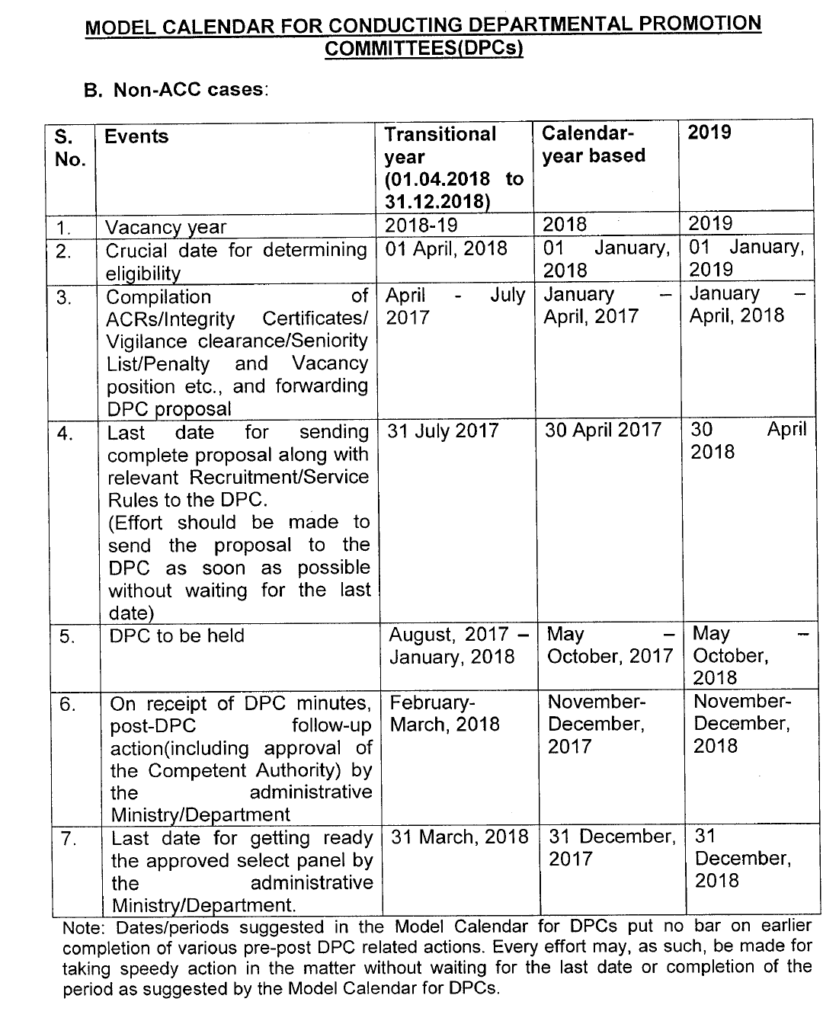