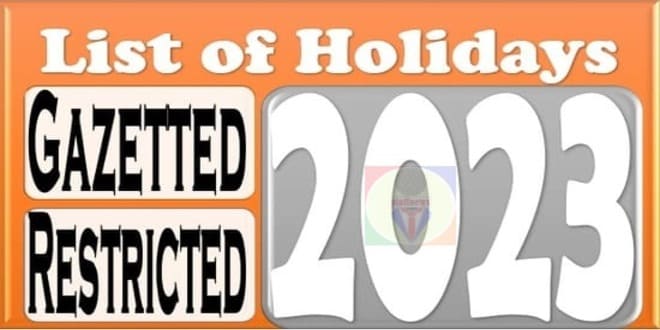 List of holidays Year 2023 in the Central Govt. offices located in Telangana: CGEWCC, Telangana Minutes of Meeting held on 28.10.2022.

The meeting of Central Government Employees Welfare Co-ordination Committee, Telangana was held on 28.10.2022 in the office of the Principal Chief Commissioner of Income Tax, Andhra Pradesh & Telangana in the 10-A Hall, Income Tax Towers, AC Guards, Masab Tank, Hyderabad. The following Members were present at the meeting:

After a brief registration process, the meeting began at 03.00 PM with the welcome words by the co-ordinator of the meeting Sri. DHEERAJ KUMAR, ITO (HQ)(Welfare), Hyderabad & Addl. Secretary, CGEWCC. The agenda for the meeting were as under:

I. Finalization of Holidays to be observed in 2023 by the Central Government offices in Telangana State.
II. Any other issue with the permission of Chair.

2. Welcoming the gathering, Sri DHEERAJ KUMAR, ITO (HQ)(Welfare), Hyderabad and Addl. Secretary, CGEWCC has given a brief to all the members with regard to selection of holidays from the prescribed list. He informed all the members that finalization of : holidays will be done according to the opinion of majority members. Members have welcomed the decision of the Secretary.

3. The Department of Personnel and Training Ministry of Personnel, Public Grievance and Pensions, Government of India, has issued a Memorandum in F. No.12/5/2022-JCA dated 16.06.2022 declaring 14 holidays as compulsory closed holidays to be observed in 2023 and 03 holidays that could be chosen out of a list of holidays given separately under para 3.1 of the letter. The members present, after having discussions, have decided the following 03 holidays to be observed as compulsory Closed Holidays in 2023 in all Central Government offices in Telangana.

5. In case of any alteration of the above mentioned restricted holidays by the State Government of Telangana State such alteration would be considered by the Chairman, CGEWCC.

7. Further, the members has requested for declaration of holiday in accordance with the state government in case of floods, cyclone etc. In this regard, the members are communicated that CGEWCC does not declare holiday in accordance with the holidays declared by the state government. However, the concerned head of office of the respective central government office may take decision on the same.

8. Finally, Sri DHEERAJ KUMAR, Additional Secretary, CGEWCC, made his remarks and concluded the meeting. The co-ordinator informed that all future communications/ circulars in respect of CGEWCC/RSB would be updated on www.incometaxhyderabad.gov.in and will be placed in notice board of CGO complex, Kavadiguda and Kendriya Sadhan, Koti. All the members/representatives of various departments present at the meeting accepted for paperless communication.

LIST. OF RESTRICTED HOLIDAYS DURING THE YEAR-2023 FOR ADMINISTRATIVE OFFICES OF CENTRAL GOVERNMENT LOCATED IN TELANGANA