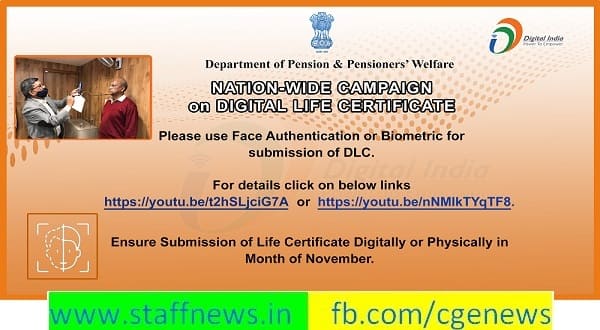 2. In the traditional mode, pensioners had to present themselves before the Pension Disbursing Authority for physical submission of their Life Certificate which entailed waiting at the bank branches in queues for this purpose. This was found inconvenient for the old, ailing and infirm pensioners. Further, there was no mechanism for the pensioners to get a sluts regarding updation of their Life Certificates in the records of the Pension Disbursing Authority.

3. To enhance “Ease of Living’ of Central Government pensioners, this Department has been promoting Digital Life Certificate (DLC) i.e. Jeevan Pramaan extensively. Initially, submission of DLCs using biometrics was commenced. However, inssues regarding authentication processes of DLCs were faced by older pensioners due to non-capturing of finger bio-metrics on account of aging.

4. This Department therefore engaged with MeitY to develop a face-recognition technology system based on UIDAI Aadhaar database whereby it is possible to subrrul Life Certificate from any Android based smart phone. As per this facility, the identity of a person is established through face recognition technique. The UIDAI server identifies the same and DLC gets generated. This breakthrough technology launched m November 2021 has reduced the dependence of pensioners on external bio-metric devices and has made the process more accessible and affordable to masses by leveraging smartphone-based technology. The SOP regarding the DLC/Face Authentication technique is attached for reference.

5. With a view to spread awareness amongst all the Central Government pensioners as well as the Pension Disbursing Authorities for use of DLC/Face Authentication Technology to submit Digital Life Certificate, DoPPW is launching nation-wide campaign for whole month of November 2022 for their ‘Ease of Living.’ 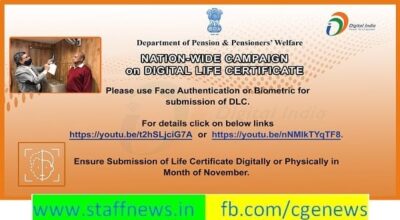 6. The Nation-wide Campaign for DLC may be carried out as per guidelines mentioned below to reach out to the maximum number of pensioners to avail the service as a request to the following stake-holders:-