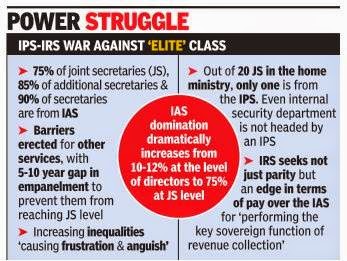 NEW DELHI: Officers of the police and revenue services have petitioned the 7th Pay Commission seeking scrapping of the Centre’s empanelment process for appointments to the posts of secretary, additional secretary and joint secretary.
The Indian Revenue Service (IRS) association has demanded scrapping of the empanelment process which is dominated by the IAS and sought higher pay. The IPS association has quoted statistics to demonstrate how other services have always been discriminated both in pay and positions compared to the ‘elite’ Indian Administrative Service (IAS).
About 75% of the joint secretaries, 85% of the additional secretaries and 90% of the secretaries are from IAS. The proportion of IAS dramatically increases from 10-12% at the level of directors to 75% at the JS level, a presentation from the IPS association says.
The 7th Pay Commission was constituted in February 2014 and is expected to give its report by October this year. Its recommendation will guide how the salary and various allowances of central staff will be revised besides improving their service condition.
“Strong entry barriers have been erected for other services, with 5-10 years gap in empanelment to prevent them from reaching JS level,” the IPS officers have pleaded before the pay commission, saying this is causing frustration among the forces that is leading country’s fight against terror and left-wing terrorism.
Out of 20 joint secretaries in the home ministry, only one is from the IPS and the department of internal security is not even headed by an IPS. “The system over a period of time created the ruling class who occupy JS and above posts and the working class which are compelled to remain at directors’ level and below,” the presentation says.
The IRS officers have asked the pay panel to consider giving them more pay over the IAS as they are “performing the most important sovereign function of revenue collection.” The two-year edge being enjoyed by the IAS should be reconsidered in the present context when they are no longer handling revenue collection for central government, the IRS presentation says.
The IRS officers have also questioned the two-year edge enjoyed by the Indian Foreign Service, seeking the pay panel to reconsider this “in the light of service conditions particularly whether any hardships are faced by them.”
A change in the composition of the civil services board, committee of secretaries and the special committee of secretaries has been sought with representation of members of other cadres.
“A rule should be made which prevents no two persons belonging to a single service to be appointed as members of these three bodies,” the IRS officers have demanded to bring in the required change in the central staffing scheme.
The IPS officers have claimed that the present system of batch-wise empanelment for senior posts is causing huge discrimination. Merit and right man for the right post is not the norm followed for selection, they said, demanding transparency in empanelment.
Read at: The Times of India