Seventh Pay Commission Report: Principles of Pay Determination and Calculation of Minimum Pay as on 01.01.2016 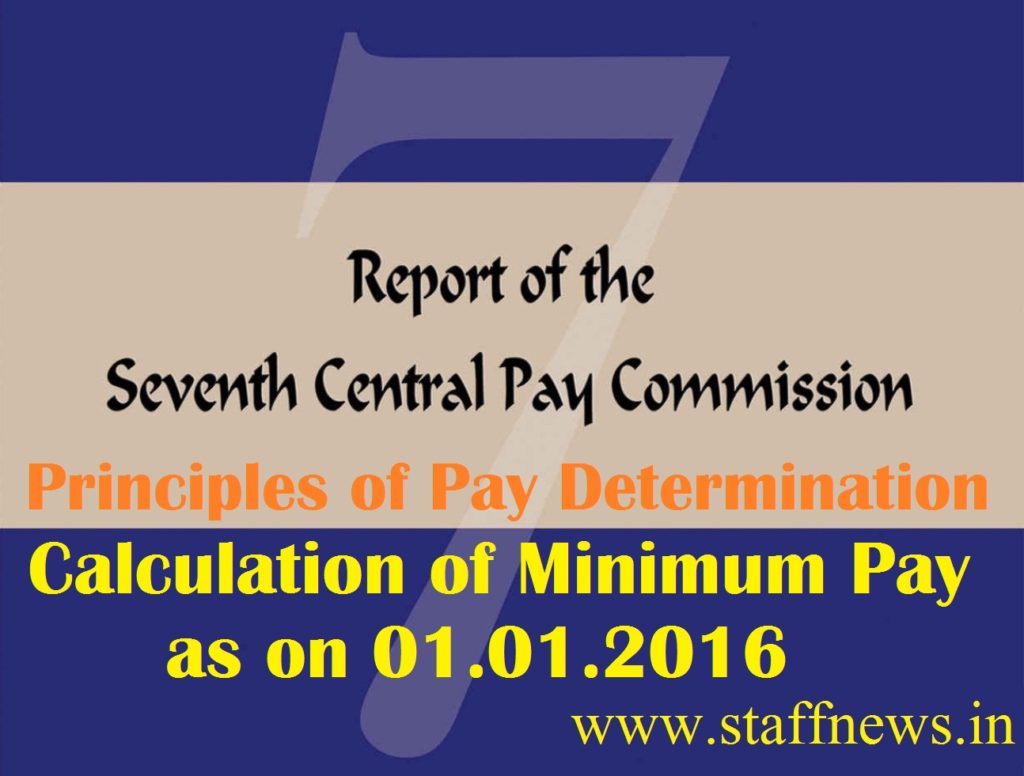 Report
of
the
Seventh
CPC


4.1.1 The Seventh CPC has been set up at a time of many noticeable changes on the governance front. The principal roleof the government as the prime facilitator has gained firm
ground. E-Governance has made considerable progress, facilitating communication and improving coordination of authorities at different tiers of government.
There is a specific emphasis on Minimum Government and Maximum Governance, harping on the concept of a leaner
bureaucracy with more skilled people. There is also a definite need to harmonize the functioning of the Central Government with the demands of the emerging
global economic scenario. This Commission had to keep all these factors while finalizing the compensation structure for the Central Government employees.

Compensation
Structure
in
a
Government
Setting

4.1.2 Employee compensation is an important element of government functioning. In general,
the level and structure of compensation should aim to achieve four objectives: (i) pay should be sufficient to attract and retain high quality staff; (ii)
pay should motivate staff to work hard; (iii) pay policy should induce other human resource management reforms; and (iv) pay should be set at a level to
ensure long term fiscal sustainability.

4.1.3 The ToRs of the Seventh CPC broadly revolve around these objectives. The
Commission has been mandated to ‘examine, review, evolve and recommend changes that are desirable and feasible regarding the principles that should govern the emoluments structure including pay, allowances and other facilities/benefits, in cash or kind, having regard to rationalization and simplification therein as well as the specialized needs of various departments.’
4.1.4 In carrying out the above, the remaining terms of reference laid down certain pointers. These include:

Challenges
before
this
Commission

4.1.5 The real challenge before this Commission is to provide a pay structure which is competitive yet affordable, attractive yet acceptable, forward
looking yet adaptable, simple yet rational, and one which matches with the current socio-economic and political conditions as well as the changing
perception of the overall administrative machinery and the public governance system.
4.1.6 One of the peculiarities of the Indian civil structure and the pay structure that has been in vogue is the high degree of emphasis on uniformity and relativity. In interacting with various associations, federations, heads of institutions,
what has clearly come across is the prevalence of historical equations across the various cadres in government. Disturbances caused in any of these have an
immediate and very vocal effect by way of strident demands in restoring earlier parities. Extensive litigation has come to be the norm. The second issue relates
to ease of administration. A simple structure with rules of fixation that are easy to understand and apply would take away the possibility of either
inadvertent errors or any element of arbitrariness. This Commission has, therefore set simplicity and complete transparency as a basic guiding principle.
4.1.7 From the employees’ perspective, the upper most aspect is naturally that the emoluments should appropriately reflect the qualifications and the skill sets that each individual brings to this system. Apart from being fair and adequate, what is
crucial is that the pay structure should correctly reflect the relative positions in the hierarchy. In its deliberations, the Commission has found that the
preponderance of grievances relates to the emoluments drawn by others as opposite to what is received by oneself. Due care, therefore, has been given to
the aspect of equity.
4.1.8 Over the years, due to downsizing of bureaucracy, issues relating to diminishing or in some cases non-existent promotional avenues have impacted the employees’ motivational levels. To address this problem, various schemes of assured career progression have been introduced
by previous Pay Commissions. It is now one of the major aspirational challenges spurring work efficiency and which needs to be acknowledged by the Pay
Commission. The emoluments structure is now expected to provide scope for career advancement by way of financial upgradation at reasonable intervals so as
to keep the workforce motivated.

Approach
of
this
Commission

Introduction
4.2.1 The estimation of minimum pay in government is the first step towards building its pay structure. In doing so, the approach is to ascertain, by using
the most logical and acceptable methodology, what the lowest ranked staff in government needs to be paid to enable him to meet the minimum expenditure
needs for himself and his family in a dignified manner.

Minimum
Pay
Estimated
by
the
V
and
VI
CPC

4.2.2 In making this assessment various methodologies are possible, and have been considered by different Pay Commissions. The V CPC adopted the ‘Constant
Relative Income Approach’ to estimate the minimum pay. This approach is based on the principle that the real minimum pay must grow in tandem with real per
capita income so that the compensation of government staff is not independent of the economic realities of the country. Accordingly the V CPC proceeded
from the minimum pay of Rs.750 estimated by the IV CPC as on 01.01.1986 and added to it the DA of Rs.1,110 to arrive at the ‘price protected’ minimum pay
of Rs.1,860 as on 01.01.1996. To this a step up of 30.9 percent was applied, the percentage being the real increase in the per capita income (per capita net
national product at factor cost) during the period 1986-95. After rounding off, the minimum pay was arrived at Rs.2,440 as on 01.01.1996, which was
subsequently increased to Rs.2,550 at the implementation stage.
4.2.3 To estimate the minimum pay in the government, the VI CPC used the norms set by the 15th Indian Labor Conference (ILC) in 1957 to determine the
need-based minimum wage for a single industrial worker. The norms set by the ILC are as below:
i. A need-based minimum wage for a single worker should cover all the needs of a worker’s family. The normative family is taken to consist of a spouse and
two children below the age of 14. With the husband assigned 1 unit, wife, 0.8 unit and two children, 0.6 units each, the minimum wage needs to address 3
consumption units;
ii. The food requirement per consumption unit is shown in the Annexure to this chapter. The specifications were derived from the recommendations of Dr.
Wallace Aykroyd, the noted nutritionist, which stated that an average Indian adult engaged in moderate activity should, on a daily basis, consume 2,700
calories comprising 65 grams of protein and around 45-60 grams of fat. Dr Aykroyd had further pointed out that animal proteins, such as milk, eggs, fish, liver
and meat, are biologically more efficient than vegetable proteins and suggested that they should form at least one-fifth of the total protein intake;
iii. The clothing requirements should be based on per capita consumption of 18 yards per annum, which gives 72 yards per annum (5.5 meters per month) for
the average worker’s family. The 15th ILC also specified the associated consumption of detergents, which can be seen in the Annexure;
iv. For housing, the rent corresponding to the minimum area provided under the government’s industrial housing schemes is to be taken. The 15th ILC kept it
at 7.5 percent of the total minimum wage;
v. Fuel, lighting and other items of expenditure should constitute an additional 20 percent of the total minimum wage.
4.2.4 The VI CPC considered additional components of expenditure to cover for children’s education, medical treatment, recreation, festivals and
ceremonies. This followed from the Supreme Court’s ruling in the Raptakos Brett Vs Workmen case of 1991 for determination of
minimum wage of an industrial worker. The Supreme Court had prescribed this amount at 25 percent of the total minimum wage calculated from the first five
components. However, in considering this additional component the VI CPC took note of the educational allowance and medical facilities being provided by
the government. Based on its calculations the VI CPC arrived at a minimum wage of Rs.5,479. This was enhanced byabout 22 percent to Rs.6,660,which was
recommended as the minimum pay in the government. The enhancement quantified the skill factor that Group D staff would acquire through training, upon their
merger into Group `C’. Ultimately, at the implementation stage, the minimum pay was fixed at Rs.7,000 per month on 01.01.2006.

Demand
made
by
JCM-Staff
Side
to
the
Commission

4.2.5 In its representation the JCM-Staff Side has submitted that the Commission must determine a ‘need-based minimum pay,’ estimated entirely from the ILC
norms and factoring in the 1991 ruling of the Supreme Court to provide for education, medical, recreation, festivals and ceremonies. In addition they have
also sought the inclusion of a quantified skill factor on the lines of the VI CPC’s approach for addressing the merger of the Group D staff into Group `C’.
They have further stated that unlike the previous CPCs, the Commission should not exclude any of the seven components (five ILS components + additional 25
percent provisioning + skill factor) on the apprehension that it would impose a heavy financial burden on the government.
4.2.6 Based on the various components of the ILC norms and the subsequent additions the JCM -Staff Side has reported that the minimum pay should be
Rs.26,000 per month, as on 01.01.2014, the date from which it wants the Commission’s recommendations to be implemented. The prices used for the calculation
are stated to be the retail prices prevailing in New Delhi, Mumbai, Chennai, Kolkata, Hyderabad, Bhubaneswar, Trivandrum and Bangalore, as on 01.01.2014.
The JCM-Staff Side has argued that this estimation of minimum pay is still on the lower side. This is on the basis of their argument that the 15th ILC
norms need to be revised for including old and dependent parents as additional consumption units.

Approach
of
the
Commission