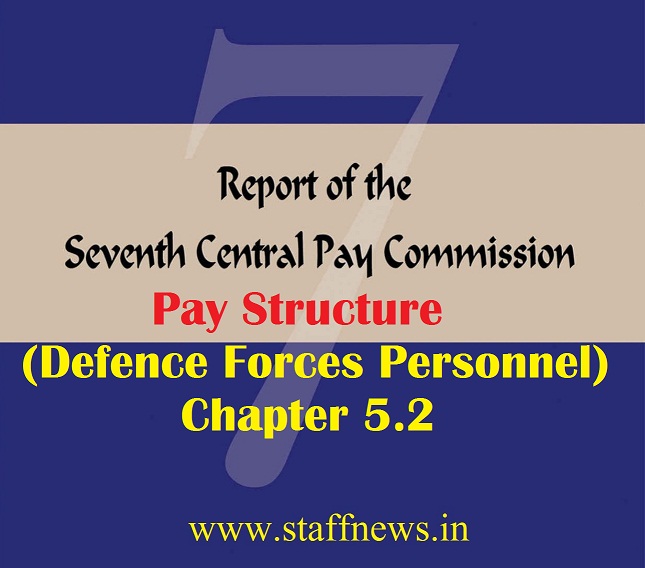 5.2.1 The Defence Services in their Joint Services Memorandum have contended that the emoluments in the Defence Services should stand a fair comparison
with what is available in the Civil Services, otherwise the Defence Services will be denied their legitimate share of the available talent pool.
5.2.2 The Commission has devised pay matrices for civil and defence forces personnel, after wide ranging feedback from multiple stakeholders. The
common aspects of the two matrices and the unique elements in the defence pay matrix are outlined in the succeeding paragraphs.

General
Approach
to
the
Pay
Matrices:
Civil
and
Defence 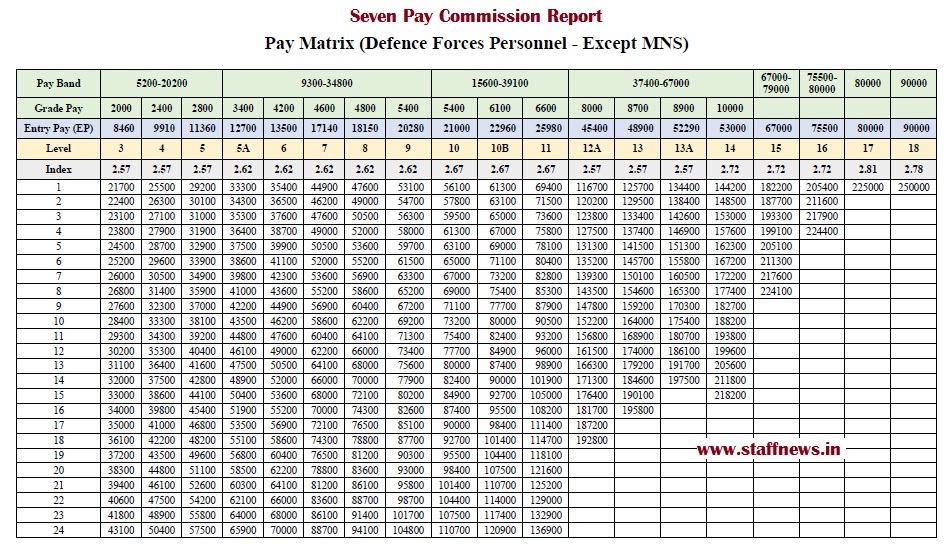 Matrix
for
Military
Nursing
Service
(MNS)
Officers
5.2.17 In the design of the pay matrix for Military Nursing Service (MNS) Officers, the Commission has kept in view the approach followed by previous Pay
Commissions as well as historical and traditional relativities between the Armed Forces Officers and Military Nursing Service Officers. In particular the
pay scales/grade pay based on the V and VI CPC Reports were kept in view.
RP-
Rank
Pay;
MSP-
Military
S
ervice
Pay

5.2.19 As indicated earlier in the case of the Defence Pay Matrix, the Commission has adopted an approach that blends elements of the principles and
philosophy adopted in devising the matrices for civil and defence forces personnel with the existing uniqueness in the pay structure of MNS officers.
5.2.20 Therefore while the minimum pay at the entry level for MNS officers is identical with their civil and defence counterparts, as is the application of
the fitment in pay for officers migrating into the matrix, the Commission has had to adopt a different approach while determining minimum pay corresponding
to the existing grade pays other than GP 5400 (PB-3). In doing so, the Commission has adopted a formulation as under:
Minimum Pay for a Rank in MNS= (Minimum Pay for that Rank in Defence Pay Matrix) x (Grade Pay of the Rank in MNS)/(Grade Pay of that Rank in the Services)
For example Minimum Pay for Colonel in MNS= (125,700) x (7600)/(8700)= Rs.1,09,807. This has been approximated to Rs.1,09,800 in the Matrix.
5.2.21 While this formulation has been adopted for all ranks of MNS officers, two exceptions have been made for purposes of rationalising the pay
structure:
i. In the case of Captains, the Commission has moderated the minimum pay level upwards to Rs.59,00017, to avoid bunching of minimum pay of MNS Lieutenant
and Captain.
ii. In the case of Brigadiers some moderation downwards from the figure arrived at by the formula (Rs.1,26,800) has been effected to provide suitable
differential in the minimum of the pay level between Brigadier and Major General of MNS. Hence the mid-point of the minimum of the pay levels of Colonel
and Major General viz., Rs.1,19,700 has been taken as the minimum pay for the Brigadier of MNS.

5.2.22 The defence forces personnel, in addition to their pay as per the Matrices above, will be entitled to payment of Military Service Pay for all ranks
up to and inclusive of Brigadiers and their equivalents. The Commission recommends an MSP for the four categories of Defence forces personnel at Rs.15,500
for the Service Officers, Rs.10,800 for Nursing Officers, Rs.5,200 for JCO/ORs, and Rs.3,600 for Non Combatants (Enrolled) in the Air Force per month. MSP
will continue to be reckoned as Basic Pay for purposes of Dearness Allowance, as also in the computation of pension. Military Service Pay will however not be counted for purposes of House Rent Allowance,
Composite Transfer Grant and Annual Increment.

17 Without moderation upwards, by use of formula, the minimum pay for a Captain of MNS would be Rs.57,280, which would be very close to Rs.56,100 the
minimum pay at the level of an MNS Lieutenant.
Annex
to
Chapter
5.2