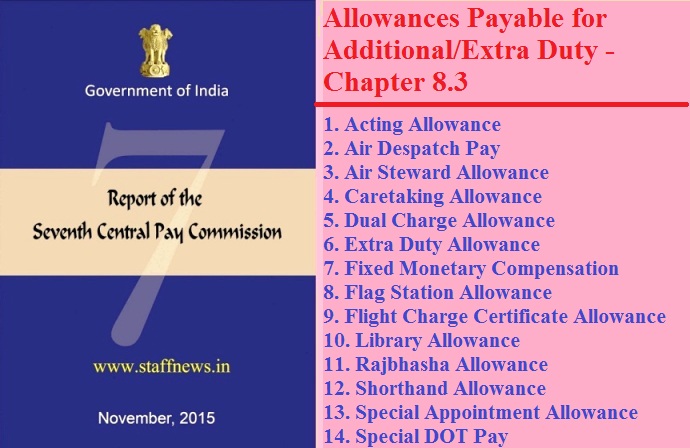 
8.3.1 Alphabetical list of Allowances covered here is as under:


8.3.2 Allowances which fall in this category are Acting Allowance, Dual Charge Allowance, and Fixed Monetary Compensation.
8.3.3 Acting Allowance is granted to JCOs (other than those holding honorary ranks as commissioned officers) of Defence
services who are appointed in Officers’ vacancies caused due to shortage of officers, but not caused by leave, temporary duty or courses of instructions.
The allowance is admissible only so long as the JCO performs the duty of an officer. The present rates are as under:

8.3.4 Dual Charge Allowance, at the rate of 10 percent of Basic Pay, is granted to an officer in Indian
Railways when he is required to hold charge of a post in addition to his own post.
8.3.5 Fixed Monetary Compensation is granted in Department of Posts to Postmen for performing the duties of an
absentee postman. The present rates are as follows:
8.3.6 The Commission has received representations regarding increase of rates and parity in the payment of these allowances.
Analysis
and Recommendations

8.3.7 In general, Central Government employees are governed by FR-49 for regulations concerning combination of appointments. If formally appointed to hold
dual charge of a higher post, they are entitled to the pay admissible in the higher post. However, no additional remuneration is admissible if the employee
is appointed to hold dual charge of a post carrying a scale of pay identical to his own.
8.3.8 Railway servants are governed by Paras 645-649 of Indian Railway Establishment Manual (Vol.I). For holding formal charge of a higher post, they are
also entitled to draw the pay admissible in the higher post. In addition, they are eligible to draw a Dual Charge Allowance at the rate of 10 percent of
their Basic Pay for holding formal charge of an identical level post, which is not permissible to employees governed by FR-49.
8.3.9 JCOs in the Defence Services are granted Acting Allowance, while Postmen are entitled to Fixed Monetary Compensation for holding additional charge.
8.3.10 The Commission is of the view that there is a case for uniformly compensating employees if they perform additional duty in addition to their own.
Also, this compensation should be a percentage of the Basic Pay of the employee since the value of time devoted for this “second”job differs with the
rank of employee. At the same time, proper safeguards should also be put in place so that such arrangements, are not continued for extensive lengths of time.
8.3.11 As such, we recommend that the allowances mentioned above should be covered under a new Additional Post Allowance, to be administered as under:
8.3.12 Additional Post Allowance

8.3.13 Some time the employees are required to perform certain extra duties, in addition to their core duty list, for which they are duly remunerated. This
remuneration is in the form of various allowances as follows:
8.3.14 Extra Duty Allowance is granted to regular ranks of Naik and Havaldar in the Indian Army holding certain
appointments in peace and war establishments. The present rates are:
8.3.15 Flight Charge Certificate Allowance is granted to Senior Air Artificers/Mechanicians of ship
borne helicopter flights in Defence forces, for discharging higher responsibilities of maintaining and clearing aircraft for air worthiness in the absence
of a Technical Officer. The existing rates of this allowance are:
8.3.16 Flag Station Allowance is granted to commercial staff of Indian Railways who are in charge of flag
stations. The current rate of the allowance is Rs.120 pm.
8.3.17 Rajbhasha Allowance is payable to officers in Indian Railways who handle additional charge of Rajbhasha Adhikaris. The
existing rates are:
8.3.18 Library Allowance is granted to teachers in various ministries, who are assigned to library duties. The current rates of
this allowance are:
8.3.19 Special Appointment Allowance is granted to certain CAPF personnel holding special appointments, in
addition to their core activity. The rates are:
(
Rs.
per
month)
8.3.20 Caretaking Allowance, at the rate of 10 percent of Basic Pay, is paid to Group `C’ staff on regular establishment
in various ministries who are deployed for caretaking duties.
8.3.21 The Commission has received various representations regarding these allowances. There is a general demand for increasing the rates.
Analysis
and
Recommendations

8.3.24 There are a few other allowances that fall under this grouping but are not covered above. Their nomenclature and the Commission’s recommendations in
their regard are detailed below:

8.3.25 Special DOT Pay–This allowance, at the rate of Rs.400 pm, is granted to DOT officers for shouldering
higher responsibility. No demands have been received regarding this allowance.
Analysis
and
Recommendations

8.3.26 The Commission does not find the continuation of this allowance justified. Hence, it is recommended that this allowance should be abolished.
8.3.27 Air Despatch Pay, Air Steward Allowance, Shorthand Allowance – Air Despatch Pay is granted to PBORs of Defence services who are employed for air dropping of
supplies in forward areas. The current rate is Rs.360 pm. Air Steward Allowance is granted to Group “Y” tradesmen of the Indian Air Force who are employed
on board VVIP flights for steward duties. The existing rate is Rs.900 pm. Shorthand Allowance is payable to PBORs of Indian Air Force and Indian Navy
employed on shorthand duties. The present rate is Rs.360 pm.
8.3.28 There are demands to abolish these allowances and grant alternative compensation to the affected employees.
Analysis
and
Recommendations

8.3.29 These allowances are paid to very few personnel of the Defence forces. The Commission is of the view that these kinds of duties are intrinsic to the
related job profile and additional allowance is not justified. Accordingly, it is recommended that these three allowances should be abolished.