Flaws of the 7th Pay Commission report: NC JCM and Confederation described it as retrograde recommendations, unexpected and unacceptable

Kiran Kumari 0 December 30, 2015 2:13 am
NC JCM and Confederation described it as retrograde recommendations, unexpected and unacceptable

The statistics reveals that there are 88% of total strength of Government servants are in Group ‘C’ Category.
Obviously those who are representing these 88% at the Forums which are constituted to negotiate with concerned Departments and Government about their issues are capable of weighing the advantages and disadvantages of recommendations of 7th central pay commission.
The Staff Associations and Workers federations are the one who are representing Group C and Group B at various levels of negotiating forums know the plights and facts of government servants more than anybody. They in fact never utter a word of praise on 7th CPC recommendations since the day the report was submitted to the Finance Minister.

National Council JCM and Confederation described it as Retrograde recommendations, unexpected and un acceptable. They declared that all the central government employees are upset and dis satisfied since many of their demands were not considered by 7th pay commission.
1. Pay Scales and allowances are arrived by multiplying 2.57, just 14.29 % increase over existing pay and Allowances after DA neutralization.
2. The rate of HRA has been abruptly reduced,
3. Payment of CCL has been reduced for second 365 days.
4. Same confusion in MACP continues,
5. Uncertainty in Pension benefit in NPS continues.
6. Existing Pension provisions are left un touched. None of the proposals submitted by Pensioners Associations are not considered.
7. Minimum Pay is very much less; Maximum Pay is lavishly higher. [Minimum Rs.18000 – Maximum Rs.275000]
8. Gap between Minimum and Maximum Pay is not reduced, but unfortunately increased. [In sixth CPC it is 1:12 , 7th CPC Recommends 1:14]
9. All the Pay commission reduced the number of pay scales but 7th Pay commission maintained the existing pay scales,
10. 55 Allowances are abolished, No new allowances are introduced,
11. Same 3% increment continues, NCJCM demand for Two Increment Days 1st January and 1st July is not considered
12. No considerable benefit on Promotion,
13. Interest free advances including LTC advance are abolished,
14. Except the introduction of New Pay Matrix, nothing new in the recommendations of 7th Pay commission
15. Again uniform Multiplication factor was not applied for arriving Entry Pay for various Grades.
Low value for Lower Grades high value for higher Grades. Again the disparity in arriving Entry Pay is maintained by 7th CPC also.
What sixth CPC had recommended in some cases, what Government has suggested in some issues, what the Department has told, that has been just followed by the 7th Pay commission.
So the Central government employees are expecting the Government to pay attention to the concerns of Govt servants in respect of some recommendations of 7th pay commission which need to be addressed to boost the morale of the Central Govt staffs.
The constituents of NCJCM already formed National Joint Council of Action (NJCA) to invite the attention of Central Government through agitation Programmes to settle their demands. Now they modified their charter of demands to include the issues regarding 7th Pay Commission recommendation and cautioned that unless it is not settled before March 2016, they will be going for indefinite Strike. 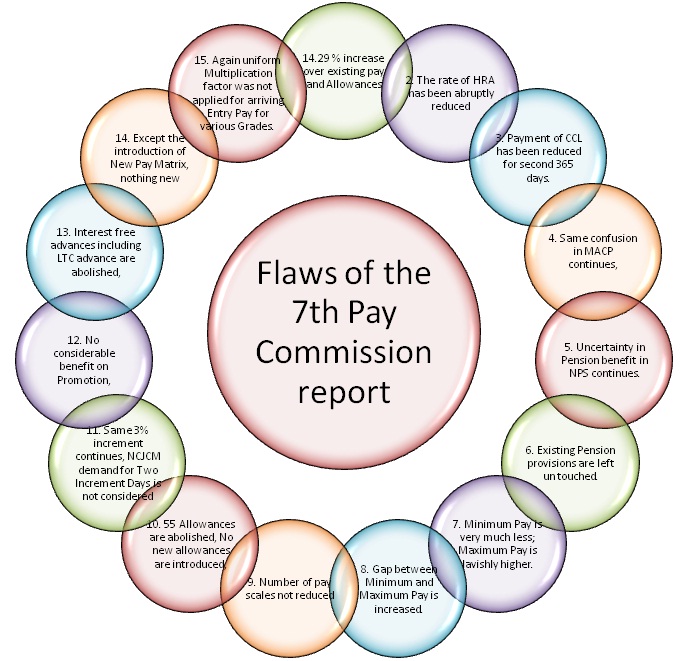