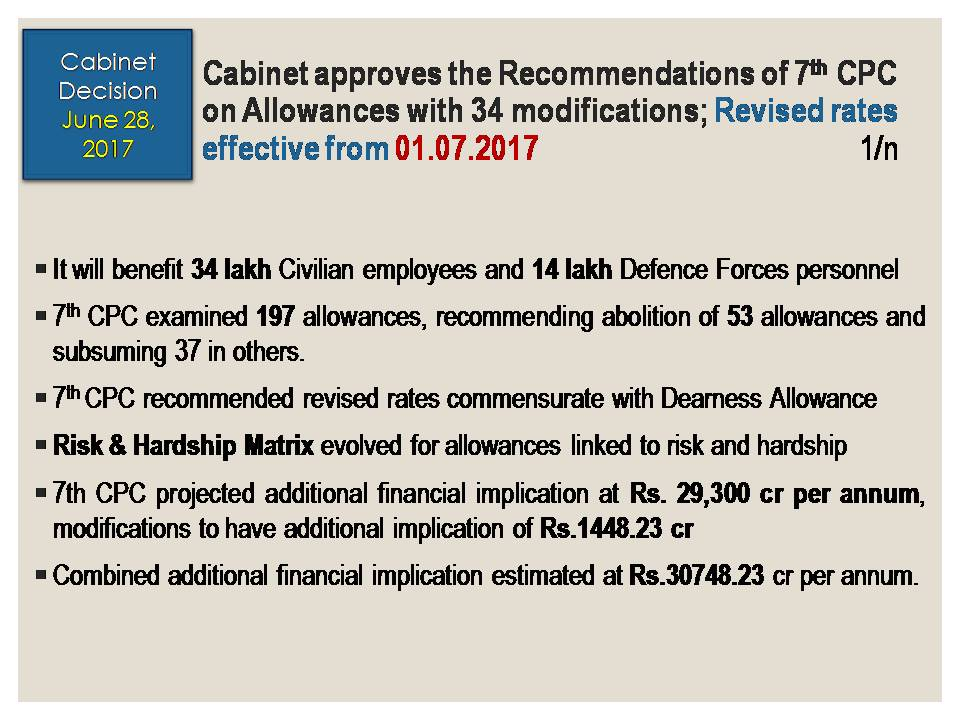 What was the 7th CPC Report/Recommendations on Allowances?
Click to view Seventh Pay Commission Report:List of Allowances (Summary) Chapter 8.1
Government has decided not to abolish 12 of the 53 allowances which were recommended to be abolished by the 7th CPC. The decision to retain these allowances has been taken keeping in view the specific functional requirements of Railways, Posts and Scientific Departments such as Space and Atomic Energy. It has also been decided that 3 of the 37 allowances recommended to be subsumed by the 7th CPC will continue as separate identities. This has been done on account of the unique nature of these allowances. The rates of these allowances have also been enhanced as per the formula adopted by the 7th CPC. This will benefit over one lakh employees belonging to specific categories in Railways, Posts, Defence and Scientific Departments.

Conclusion
While increasing the rate of allowances affecting the central government employees, especially the Defence, CAPF and Coast Guard personnel, the staff of Railways, Postal department and nursing staff, the total number of allowances have been rationalized from 197 to 128. Thus, the Government has shown a great deal of fiscal prudence and at the same time addressed the genuine concerns of the employees and responded to some of the administrative exigencies necessitating the modifications.
Click here to read more: 7th Pay Commission Revised Allowances – Cabinet approval: w.e.f. 1st July, 17 [Official News]