Kiran Kumari 1 July 30, 2017 7:18 am
Implementation of 7th Pay Commission for employees of Sports Authority of India (SAI) & other Autonomous Bodies
GOVERNMENT OF INDIA
MINISTRY OF YOUTH AFFAIRS AND SPORTS
LOK SABHA
UNSTARRED QUESTION NO: 2039
ANSWERED ON: 27.07.2017

ASHOK SHANKARRAO CHAVAN
SUDHEER GUPTA
GAJANAN CHANDRAKANT KIRTIKAR
KUNWAR HARIBANSH SINGH
VIJAY KUMAR S.R.
BIDYUT BARAN MAHATO
Will the Minister of
YOUTH AFFAIRS AND SPORTS be pleased to state:-
(a) whether it is a fact that the benefits of 7th Pay Commission has not yet been extended to the employees of Sports Authority of India (SAI);
(b) if so, the details thereof and the reasons for the delay in its implementation;
(c) the time by which it is likely to be implemented in SAI; and
(d) whether the Government has issued guidelines relating to revision of pay of employees of Quasi-Government Organizations, Autonomous Organizations, Statutory Bodies etc. set up by the central Government and funded/ controlled by the Central Government and if so, the details thereof?

(a) to (c): Yes Madam. The benefits of 7th Pay Commission have not yet been extended to the employees of Sports Authority of India (SAI).
Ministry of Youth Affairs and Sports in its letter dated 18th January, 2017 has enclosed copy of Ministry of Finance O.M. No. 1/1/2016-E-III(A) dated 13th January, 2017 to Sports Authority of India (SAI) and requested to furnish comments for extending the benefits of 7th Central Pay Commission to its employees. SAI at first calculated the financial implications involved including of Pensioners.
As 30% of the Financial Implications have to be met by the Autonomous Bodies, therefore, possibilities were explored for meeting the 30% of revenue generation.
After working out the Financial Implications and possibility of additional revenue generation, the proposal for implementation of 7th CPC was placed before the Finance Committee.
The recommendation of the Finance Committee has been placed before the Governing Body of SAI at its 49th (Special) Meeting.

(d) Yes Madam. Government of India, Ministry of Finance (Dept. of Expenditure) vide OM No. 1/1/2016-E.III(A) dated 13th January, 2017 has issued guidelines regarding revision of pay of employees of Quasi–Government organization, Autonomous organization, Statutory bodies etc. set up and funded / controlled by the Central Government. The O.M. has fixed some parameters about additional financial impact arising out of the implementation of the revised pay scales and instructed that until further orders the existing allowances in the autonomous organizations shall continue to be admissible as per the existing terms and conditions, irrespective of the revised pay scales having been adopted.
*** 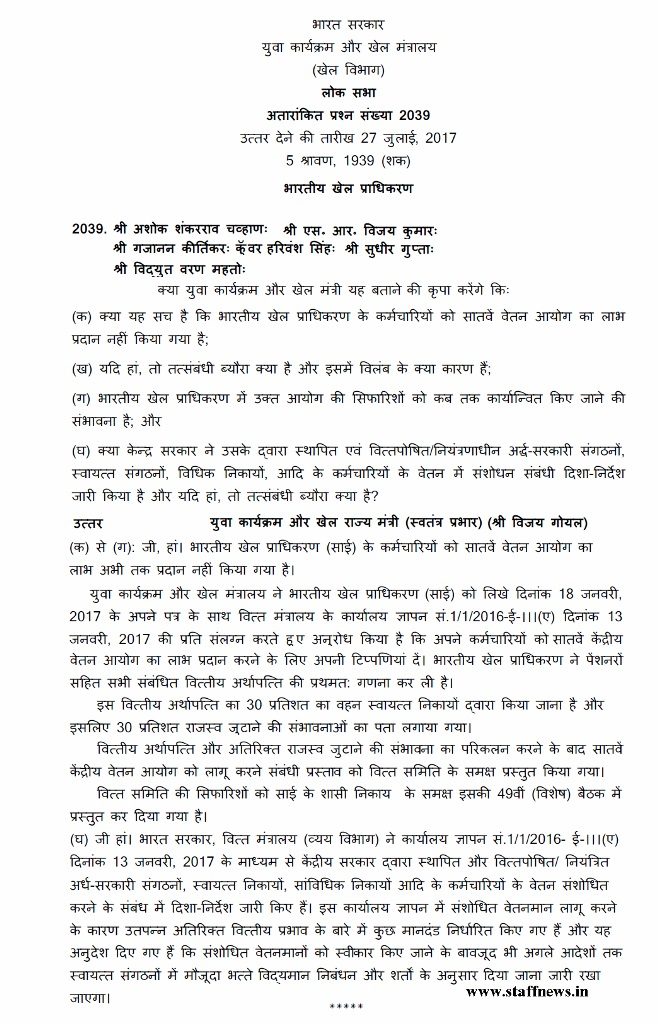