With reference to the subject mentioned above and in continuation of this Department’s OM of even number dated 07.09.2016 and 13.06.2017, detailed instructions are hereby being issued on the application of the benefit on account of bunching of stages while fixing the pay in the revised pay structure as a response to a large number of references received from Ministries/Departments.
2. The provisions giving effect to the recommendations of the 7th CPC on extending the benefit on account of bunching were notified vide DoE OM. dated 07.09.2016. Benefits on account of bunching have been extended during the initial fixation of pay in the revised pay structure while implementing the recommendations of earlier CPCs also. Bunching occurs in the fixation of pay when the pay at two or more consecutive stages in a Pay Scale/ Grade Pay in the pre revised scale get fixed at the same stage in the corresponding Pay Scale/ Level in the revised pay structure.

6. In the 5th CPC structure, the maximum and the minimum of every pay scale were well defined. In the 6th CPC structure, Entry Pay was separately notified for most Grade Pay levels to govern the entry pay of direct recruits in that level. The pay of those moving from a lower grade to a higher one on promotion was regulated in terms of provisions contained in Rule 13 of CCS (RP) Rules, 2008. As such, the Entry Pay notified for a given Pay Scale/ Grade Pay is the effective minimum of that Grade Pay for direct recruits. For an employee getting promoted, the sum of the minimum of the relevant Pay Band and the Grade Pay is the effective minimum pay. The 7th CPC, in its Report, has commented that this led to many situations where direct recruits drew higher pay as compared to personnel who reached that stage through promotion. Demands were received by the 7th CPC from many staff associations and employees for removal of this disparity which the 7th CPC refers to as differential entry pay.
7. In the revised dispensation for pay fixation in the New Pay Structure as recommended by the 7th CPC, direct recruits shall start at the minimum pay corresponding to the level to which recruitment is made, which will be the first cell of each level. For those promoted from the previous level, the fixation of pay in the new level will depend on the pay they were already drawing in the previous level. The pay, however, cannot be less than the first stage of the relevant level. While enumerating the benefits of migrating to the new system at para 5.1.47 of the 7th CPC Report, it has been stated that ‘the issue of differential entry pay has been resolved’. At para 5.1.36 of the 7th CPC Report it has also been mentioned that rationalization has been done with utmost care to ensure minimum bunching at most levels. Rationalization has been done by the 7th CPC through the Index of Rationalisation (IoR) which has been multiplied with the Entry Pay in the 6th CPC regime to arrive at the first cell of each level. With the Entry Pay along with IOR being used as the determiner of the first cell, pay stages below the Entry Pay have been consciously brought up to the level of Entry Pay and its corresponding pay stage in the revised pay structure. As a result, all pay stages below the Entry Pay in any Level will, on re-fixation, converge to the first pay stage in that level. As this convergence takes place on account of a conscious decision of the 7th CPC intrinsic to the architecture of the Pay Matrix by indicating the Entry Pay as the starting point of each Level, benefit on account of bunching cannot be extended with reference to pay stages lower than the Entry Pay indicated by the 7th CPC for that level in the Pay Matrix. Extending the benefit of bunching with reference to pay stages below the entry pay will perpetuate the difference in pay on account of differential Entry Pay which was addressed by the 7th CPC. 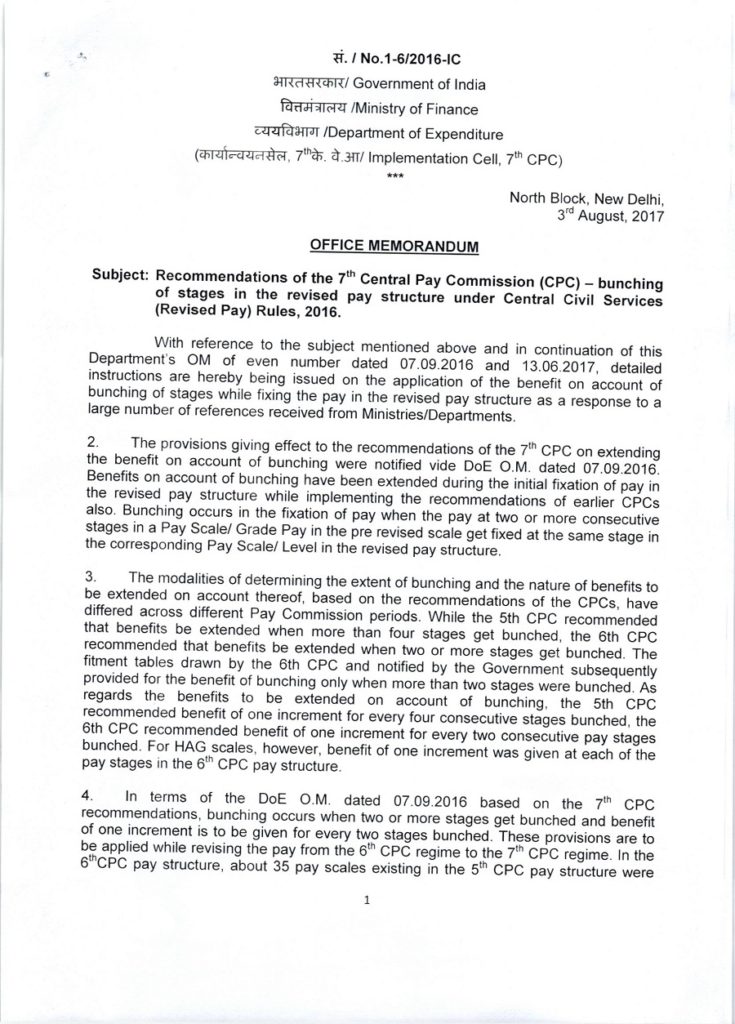 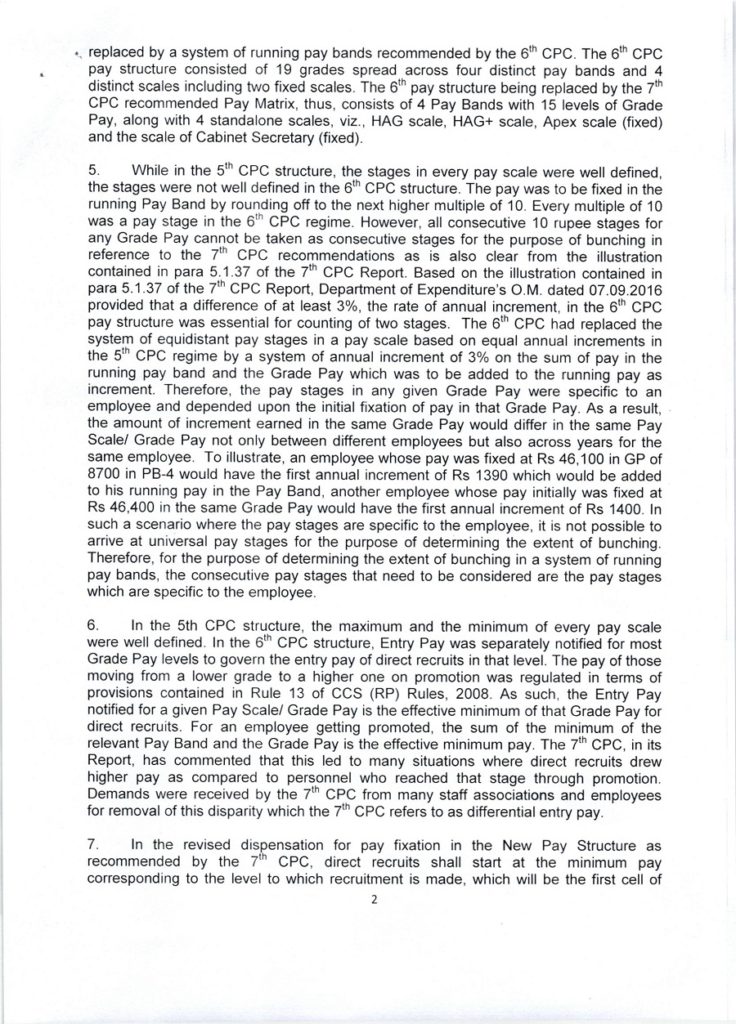 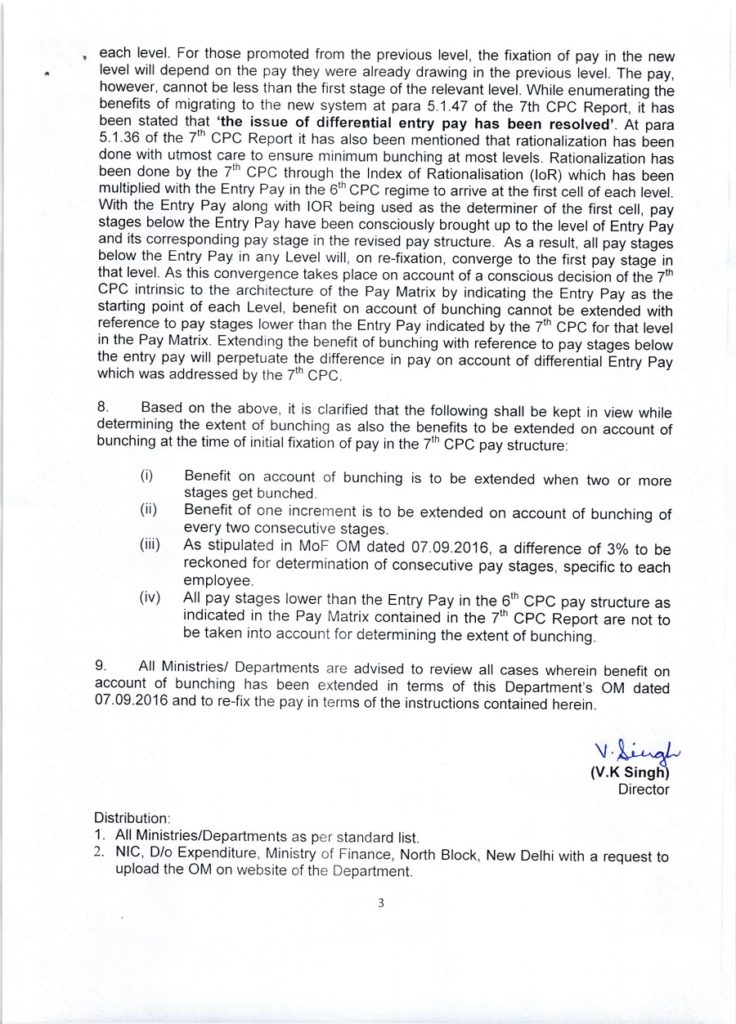