RESOLUTION ADOPTED BY THE NATIONAL EXECUTIVE OF NCCPA HELD AT NAGPUR ON 19.08.2017 ON SOME BASIC ISSUES OF CG PENSIONERS AFTER THE IMPLEMENTEATION OF 7th CPC RECOMMENDATIONS:

RESOLUTION ON BUILDING THE ORGANISATION OF NCCPA

The National executive of NCCPA is of the firm opinion that the growth of the united platform of pensioners’ movement alone is the guarantee to face the onslaught of the Government on pension and social security. NCCPA is the only class conscious apex organization for unifying all CG Pensioners under one roof and effectively project the issues of CG Pensioners for appropriate settlement. The need to strengthen the NCCPA is therefore paramount.
Both strengthening NCCPA at the CHQ level and strengthening it at State level are important though both are complimenting each other. The strengthening at CHQ level can be concentrated by approaching the existing pensioners’ organizations for affiliating with the NCCPA. The strengthening of the existing affiliates of NCCPA also can contribute to the strengthening of NCCPA CHQ. As far as the States are concerned, it is our responsibility to found State COC of NCCPA with the state organizations of our affiliates (both CGPA and Departmental wise Affiliates). Various state level functioning CGPA organizations also can be approached for joining in the State COC of NCCPA. We are witnessing that for lack of a strong platform of CG Pensioners many issues of Pensioners are unable to be effectively projected before the Government. The solution of pensioners’ issues is left to the mercy of the Government and Authorities through SCOVA and by approaching the doors of courts that takes a longer time. Even after favourable judicial pronouncements the Government is in the habit of denying the benefit to all similarly placed candidates, again against the Supreme Court Judgment. A stronger voice of united pensioners alone can guarantee earlier solutions to many vexed issues.
There are also issues like the NPS, Attack on Pensioners and the danger of bringing all existing employees and pensioners also under the NPS in future with the help of PFRDA Act that gives the Government the power to do so at its will.
This National Executive therefore calls upon all its Affiliates (both CGPA and Departmental wise Associations) to take all the initiative for founding State COC of NCCPA as a measure of strengthening the united movement of CG pensioners on one hand and to work for broader unity of all Pensioners like the Central, State and PSU Pensioners Associations on the other.

This National Executive meeting held of 19.08.2017 at Nagpur notes with utter dismay and expresses its grave concern on the stand taken by the Government of India on the National Pension Scheme introduce from 01.01.2004. A demand was placed before the 7th CPC to scrap that contributory pension scheme and to bring all the CG Employees and others in defined and assured pension scheme. The 7th CPC refrained itself on the plea that the issue is not available in their term of reference. The Government formed a Committee with a view to strengthen the NPS.
This meeting observes with hope that Confederation of CG Employees & Workers and the All India State Government Employees Federation had decided some phased programme of action to fight back the situation.
This National Executive Committee meeting of NCCPA calls upon all its affiliates to take all possible steps to join the programmes on this issue and to generate public opinion by staging dharna, rallies, street corner meetings etc in the coming days.

The National Executive Committee meeting of NCCPA held at Nagpur on 19.08.2017 notes with grave concern that the Government of India is following the tactics of delaying the implementation of GDS Committee Report by way of setting up Committees on various pleas. National Federation of Postal Employees is going to stage one day strike on 23.08.2017 demanding implementation of GDS Committee recommendations. This National Executive Committee meeting of NCCPA is whole heartedly supporting the proposed strike and calls upon all the affiliates to stand by the striking employees on the day of strike by staging solidarity type of programme on 23.08.2017.

RESOLUTION ON SOLIDARITY WITH THE CENTRAL TRADE UNIONS

The National Executive Meeting of NCCPA held at Nagpur on 19.08.2017 welcomes the decision taken by the Central Trade Unions and Federations and Confederations and Associations of Central Government, State Government and Public sector like the BSNL, Banks, Insurance etc to organise a series of Programmes against the economic policies and the onslaught on the working Class. This National executive expresses its total solidarity with the Programme of Action of Indefinite strike to be launched by the Indian Working Class unitedly. This Executive also calls upon all our affiliates to mobilize maximum membership to Delhi to participate on 10th November in the three days dharna programme to be organised in Delhi from 9th to 11th of November, 2017 as a prelude to the impending indefinite strike. All our affiliates will concentrate full mobilization on the second day of the three days dharna in order to focus the total solidarity of pensioners as a community to the struggle of the working class.
Posted by Vyas SK 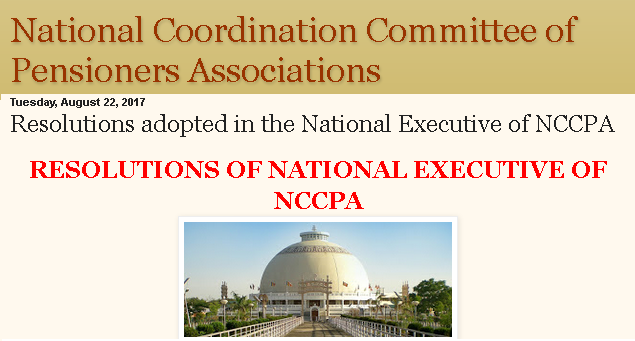