Kiran Kumari 0 August 22, 2017 6:29 pm
LTC Clarification – Procedure for booking of Air Tickets by non-entitled Govt Employee and claiming entitled rail fare
No. 31011/5/2014-Estt (A.IV)
Government of India
Ministry of Personnel, Public Grievances and Pensions
Department of Personnel and Training
Establishment A-IV Desk
North Block, New Delhi-110 001
Dated: August 21, 2017
OFFICE MEMORANDUM
Subject:- Procedure for booking of air-tickets on LTC – clarification reg.
The undersigned is directed to refer to this Department’s O.M. of even no. dated 23.09.2015 on the subject noted above and to say that as per the extant instructions, whenever a Government servant claims LTC by air, he/she is required to book the air tickets directly from the airlines (Booking counters, website of airlines) or by utilizing the services of the authorized travel agents viz. ‘M/s Balmer Lawrie & Company’, ‘M/s Ashok Travels & Tours’ and ‘IRCTC’ (to the extent IRCTC is authorized as per DoPT O.M. No. 31011/6/2002-Est(A) dated 02.12.2009) while undertaking LTC journey(s).

2. In this regard, references are received in this Department seeking clarification whether the aforesaid condition of booking the tickets through authorized travel agents needs to be followed in cases where a non-entitled Government servant travels by air on LTC and claims the entitled train fare.
3. The matter has been examined in consultation with Department of Expenditure, Ministry of Finance and it is hereby clarified that in case of non-entitled Government servants travelling by air on LTC and claiming entitled rail fare, the condition of booking the air tickets through authorised travel agents viz. ‘M/s Balmer Lawrie & Company’, ‘M/s Ashok Travels & Tours’ and ‘IRCTC’ may not be insisted upon. In rest of the cases, the condition of booking the tickets through authorised modes shall continue to follow.

Enclosure: As above
(Surya Narayan Jha)
Under Secretary to the Government of India 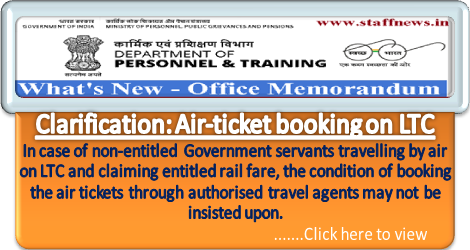