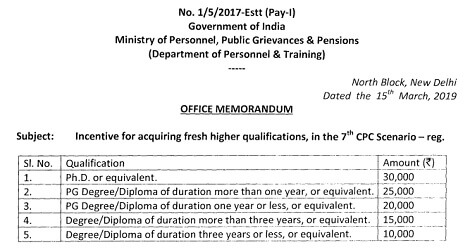 Central Government Servants acquiring fresh higher qualifications after coming into service are granted incentive in the form of one-time lump-sum amount ranging from Rs.2,000/-to Rs.10,000/-, as provided in this Department’s OM No. 1/2/89-Estt.(Pay-l) dated 09.04.1999 and other related OMs.

2.The 7th CPC has reviewed the rates of incentive presently available to employees on this account in addition to pay, and have suggested their rationalization and simplification in Para 8.9.11 to 8.9.14 of their report.

3.Ministry of Finance, Department of Expenditure (DOE) Resolution No. 1-2/2016-IC dated 25.07.2016 vide Para 7 provided that the matter regarding allowances (except Dearness Allowance) based on the recommendations of the 7th CPC shall be referred to a Committee under the Chairmanship of Finance Secretary, and until a final decision thereon, all allowances including this incentive were required to be paid at the existing rates in the existing pay structure (the pay structure based on 6th CPC) as if the pay has not been revised w.e.f. 1st January, 2016.

5.The President is pleased to decide that in supersession of all the existing orders/OMs/instructions/guidelines on the subject of granting incentive for acquiring fresh higher qualifications, the following one-time lump-sum rates as incentive for acquiring fresh higher qualification by a Government employee shall be permissible for courses in fields that are directly relevant to the employee’s job:

7. Ministries/Departments are free to choose courses on their own. However, the grant of incentive in respect of above qualifications will be subject to the fulfillment of the criteria laid down in para 8 below. The grant of incentive for the qualifications listed above shall be considered by the administrative authorities in consultation with their IFD and necessary orders shall be issued after ensuring that the criteria laid down in para 8 below are fulfilled.

8. Criteria/guidelines for granting incentive for acquiring fresh higher qualifications, in the 7th CPC Scenario, are as under:

8.3. The quantum of incentive will be uniform for all posts, irrespective of their classification or grade or the department.

8.4. The incentive shall not be admissible where the government servant is sponsored by the government or he/she avails study leave for acquiring the qualification.

8.5. The incentive would be given only for higher qualification acquired after induction into service.

8.7. The qualifications meriting grant of incentive should be recognized by University Grants Commission, respective regulatory bodies like AICTE, Medical Council of India, etc. set up by Central/State Government or recognized by the Government.

8.8. The incentive shall be limited to maximum two times in an employee’s career, with a minimum gap of two years between successive grants.

8.9. The Government servant should prefer the claim within six months from the date of acquisition of the higher qualification.

9.The incentive as per this OM will be admissible for above qualifications acquired on or after 01.07.2017.

11.Insofar as the persons working in the Indian Audit and Accounts Department are concerned, these orders issue in consultation with the Comptroller and Auditor General of India.