Fixation of initial pay of Nursing Cadre in the 6th CPC Pay structure – Circulation of Fixation Tables [RBE No. 09/2020]

Fixation of initial pay of Nursing Cadre in the 6th CPC Pay structure – Circulation of Fixation Tables [RBE No. 09/2020]

GOVERNMENT OF INDIA
MINISTRY OF RAILWAYS
(RAILWAY BOARD)

3. References were received from various Zonal Railways seeking necessary clarification/fixation tables regarding correct methodology for fixation of pay (indicating benefit of bunching) for the posts of Chief Matron/ Matron (pre-revised scale of Rs. 7450-11500 & 6500-10500) where various stages in pre-revised scales are getting bunched at minimum of PB-3 (Rs. 15600).

4. The matter has been examined in consultation with Finance Dte of this Ministry and accordingly, provisional fixation tables in respect of Chief Matron/ Matron in the pre-revised scale of 6500-10500 & 7450-11500 (placed in revised pay scale of 15600-39100 + GP 5400) are annexed herewith for utilizing the same for initial pay fixation in 6th CPC pay structure for the above posts.

5. This issues with the concurrence of Finance Directorate of this Ministry. 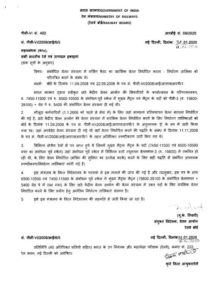