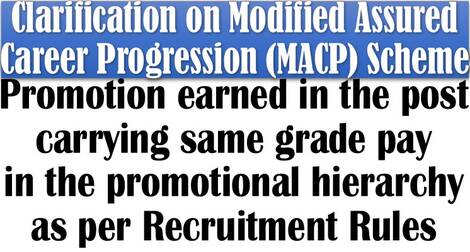 No. 4-7/MACPS/2019-PCC
/ Government of India .
Ministry of Communications
Department of Posts :
(PC Cell)

On the above noted subject, this refers to various references seeking clarification on following points of doubt in respect of those employees who were promoted from Inspector Posts (IP) cadre to Asstt. Superintendent of Posts (ASP) cadre in the same Grade Pay Rs. 4600/- (identical pay scale-PB-2nd) during 6th CPC regime:-

i. Whether promotion earned from IP to ASP cadre in the same Grade Pay of Rs. 4600/- (identical pay scale) in 6th CPC regime can be ignored for Modified Assured Career Progression Scheme (MACPS) purpose under the provisions of para-5 of MACP Scheme of 19th May, 2009, consequent upon upgradation of pay scale of Inspector Posts from Grade Pay Rs.4200/- to that of Rs.4600/-.

ii. Whether the benefits of 3rd financial upgradation under Modified Assured Career Progression Scheme (MACPS) with subsequent benefits in term of para 6.1 of Annexure-I to OM dated 22.10.2019 (MACPS guidelines) is admissible on completion of 10 years regular service in the same Grade Pay of Rs. 4600/-, or on completion of 10 years from the date of regular promotion to ASP cadre from Inspector Posts in the identical Grade Pay Rs. 4600/-.

2. The matter was examined in consultation with Department of Personnel & Training (DoP&T) and the extract of clarification conveyed by the Establishment (D), DoP&T vide Comp. Dy. No. 1433722/20/CR are re-produced as under:

4. Attention is invited towards para 1 of Annexure-I to DoPT OM No. 35034/3/2008-Estt.(D) dated 19-05-2009 which provides that “There shall be three financial upgradations under the MACPS, counted from the direct entry grade on completion of 10, 20 and 30 years service respectively. Financial upgradation under the Scheme will be admissible whenever a person has spent 10 years continuously in the same grade-pay.”

5. Para 8 of Annexure-I to DoPT OM dated 19-05-2009 further provides that “Promotion earned in the post carrying same grade pay in the promotional hierarchy as per Recruitment Rules shall be counted for the purpose of MACPS.”

6. From the information provided by the Administrative Department, 1t may be observed that the said official was appointed as Postal Assistant on 19-12-1994 in corresponding GP Rs. 2400/- and the official has already earned two promotions on 14-10-2004 and 30-04-2014. However, the date of retirement on superannuation in r/o official is not mentioned in the proposal. Therefore, in terms of above provisions under MACP Scheme, the official would be eligible for grant of 34 financial upgradaton in the immediate next higher level in the hierarchy of the Pay Matrix as given in PART A of Schedule of the CCS (Revised Pay) Rueles, 2016 but not before 30-04-2024 (on completion of 10 years of service from 2nd promotion) if otherwise, admissible and the official fulfils the other eligibility conditions.”

3. It is therefore, requested to bring these clarifications/instructions to the notice of all concerned immediately and ensure strict adherence in true spirit. 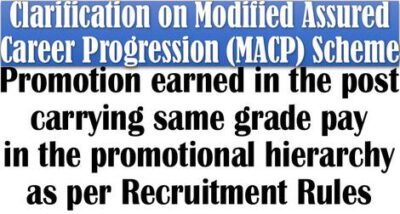