*Strike out whichever is not applicable

N.B (a) The term “ Ordinarily” used here will have the same meaning as in Section 20 of the Representation of the People’s Act 1950.

(b) The authorities competent to issue caste certificate are indicated below:-

(iii) Revenue Officer not below the rank of Tehsildar, and

(iv) Sub-Divisional Officer of the area where the candidate and/or his family resides. 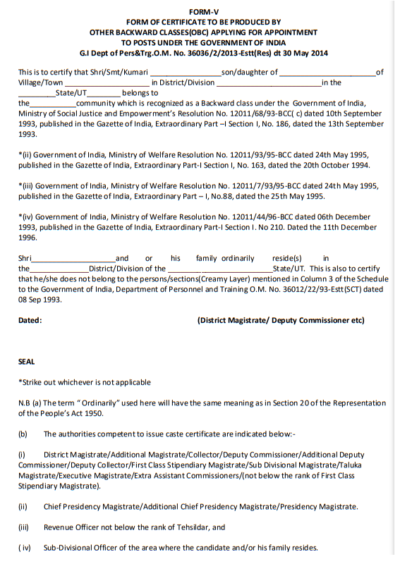 Monika bansal: Pls send all information on my mail address

Viswanath Vakade: Refer my complaint no. 185133 dated 2022-11-17, I have not received user ID and password to submit my LIFE CERTIFICATE. Also I am unable to browse Sparsh.defencepension.gov.in. I have sent my complaints to local embassy(San Francisco,USA) and my pension drawing, SBI bank. Nobody is responding. I have sent Manual Life Certificate also. But they have not accepted. Please reply to my Email address