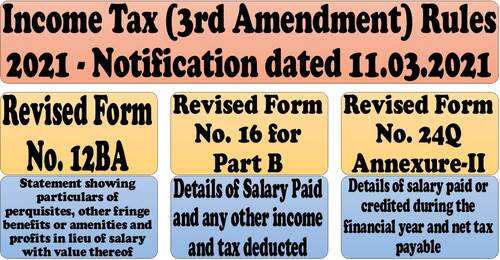 (CENTRAL BOARD OF DIRECT TAXES)

(i) For Form 12BA, the following shall be substituted, namely:–

Statement showing particulars of perquisites, other fringe benefits or amenities and profits in lieu of salary with value thereof

I, ___________, s/o _____________ working as _____________ (designation) do hereby declare on behalf of ____________ (name of the employer) that the information given above is based on the books of account, documents and other relevant records or information available with us and the details of value of each such perquisite are in accordance with section 17 and rules framed thereunder and that such information is true and correct.

(ii) In Form 16, for Part B (Annexure), the following shall be substituted, namely :-

(iii) in Form No. 24Q, for “Annexure II”, the following Annexure shall be substituted, namely:– 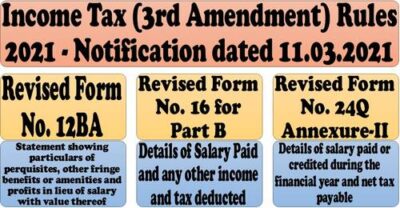