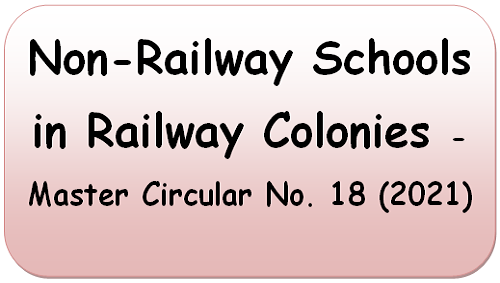 Education being primarily a State subject, privately managed schools functioning in Railway colonies should not ordinarily be taken over by Railway Administrations.

Wherever the need for additional school is felt by Railway staff, such schools should as far as possible be organised and managed by Railwaymen themselves and for this purpose Railway Administrations may render suitable assistance to the managements. The nature of assistance to such schools may be as under:

(a) In respect of such schools as have been functioning satisfactorily and are fairly well established, any proposal to expand the existing school buildings or constructing new ones, the agencies may be asked to raise some portion of the sum required for the purpose, so that they may have a financial stake in the venture, financial assistance from the Railway being in the nature of subsidy. Railway land and buildings where it can be spared, may be leased on nominal license fees. No compensation will be payable for any structure erected by the licensee on the land if the Railway terminates the license.

(b) Furniture and equipment may also be purchased from Railway Revenues and donated to the privately managed schools run by the Railwaymen. The expenditure to be incurred may be equal to the amotmt proposed to be spent by the school for this purpose subject to the condition that it does not exceed 50%, the amount that would have been spent by the Railway if the school had been a Railway school.

Some of the privately managed schools functioning in Railway colonies were unable to balance their budget and to run without grant-in-aid from Railway revenues. As closure of such school was likely to affect adversely the education of the children/wards of Railway servants, the General managers are authorised to sanction recurring ad hoc grant on the basis of average loss per child (including the children/wards of Railway servants) or the amount at the rate of Rs.8, Rs.12 and Rs.16 per child per month respectively for Primary/Middle /High & Higher Secondary Classes which-ever is less. (Railway Board’s letter No. E(W)98ED2-9 dated 4.12.1998)

For non-recurring/recurring grants from Railway revenues, the privately managed school should fulfill the following conditions:-

(i) To qualify for a grant, a school must have at least 113 of its pupils or 100 pupils, whichever is less from amongst children and wards of Railway servants;

(ii) The school should be one that is fully recognised for all purposes by the State Government concerned in accordance with their Education Code and should be in receipt of the full grant-in-aid as admissible under the Education Code;

(iii) A grant has to be sanctioned only to such schools as are not able to balance their budget;

(iv) The amount of grant-in aid may be fixed on a ad hoc manner but should, in no circumstances exceed the amount due on the basis of average 11loss11 per child (including both children of Railway servants and their wards) nor should it exceed Rs. 8, Rs. 12 and Rs. 16 per pupil per month respectively for Primary, Middle and High/Higher Secondary classes;

(v) The sanction should be on an annual basis and no element of non-recurring cost should be allowed.

(ii) In sanctioning the grants the Railway administrations should indicate to the school authorities the conditions stipulated in para 2071-GI for conducting checks as and when necessary.

(iii) These schools should be regularly visited/inspected by the Education Officer/Railway officials on the same lines as the Railway managed schools and be shortcomings reported by these officials should be brought to the notice of the Managing Committee of the schools so that these could be removed. In the event of the Managing Committee not being amenable to the advice of the Railway Administration in the affairs of the school, it shall be open to the Administration to withhold temporarily or permanently all subsidies, grants and aids.
(Railway Board’s letter No. E(W)61/ED-2/24 dated 20.12.1961)

With a view to improve the facilities and the standard of education in Railway schools, a One Man Committee was set up in 1986 under the Charimanship of Shri Avtar Singh Rikhi.The Committee’s recommendation on various aspects of education in Railway schools were considered by the Board and adopted, wherever feasible. A summary of the recommendations and the decisions of the Board are contained in the Annexure to the Board’s letter No. E(W)87/ED-l/5 dated 17.8.1987. Apart from these measures, the following decisions have also been taken by the Board to improve the functioning of Railway schools:

(i) Implementation of “Operation Black Board” Scheme launched by the Deptt. Of Education in all the Primary and Austerity Type Primary (ATP) Schools on the Railways. This involves provision of certain basic minimum facilities in these schools. (Board’s letter No. E(W)87/ED-l/5 Pt.Ill dated 12.1.88, D.O. letter No. E(W)88/ED- 1/12/Vol.I dated 5. 7.89).

(ii) With a view to enable the schools to have assured funds for planning and augmenting the libraries, the following amounts should be earmarked at the beginning of the financial year for school libraries:-

(v) It has been decided that the in service training programme of Railway school teachers may be managed by Zonal Railway themselves with the help of National Coimcil of Education Research and Training and its Regional Institute of Education at Ajmer, Bhopal, Bhubaneshwar, Mysore as well as Regional lnservice Training and Extension Centre, Bangalore and North East Regional Institute of Education, Shillong and State Councils of Educational Research and Training. The Kendriya Vidyalaya Sangathan and other institute of reputes may also be approached. The Railways may also think of cultivating a cadre of resource persons by sending young and capable PGTs for Resource Persons Training who in turn can train the TGTs etc in the Railway schools, which will in the long run obviate the need to approach the Training Centers outside Railways. The Zonal Railway have also been authorised to incur expenditure and make payments for arranging training.
(D.O. letter No. E(W)97ED2-97 dated 21.8.98 and 9.11.99)

(viii) Detailed guidelines have been issued to effect improvement in Railway schools by way of repair buildings, institutional support, ensuring recognition by the State Education Departments, spreading the awareness for aesthetic surroundings and horticulture activities. Stress has also been laid on regular inspections of Railway schools by GM, DRM and the Committee of DPO, DEN and DAO. The advisability of closure of uneconomical ATP schools on Railways and securing Grants-irl-aid for Railway schools from State Governments has also been highlighted.
(D.O. No. E(W)98ED2 – 7 dated 18.2.99 and letter dated 17.5.99)

(ix) With a view to improve quality of education in Railway Schools the following instructions/measures /steps have been taken for (a) engagement of school teachers on contract basis in Railway Schools (b) reduction of time period between two successive part-time appointments of contractual teachers (c) enhancement of consolidated monthly remuneration being paid to contractually appointed Railway school teachers.

(a) Engagement of part time teachers appointed on contract basis against short terms vacancies to improve the overall performance of Railway schools in line with Kendriya Vidyalaya.
(Railway Board ?s letter No. E(W)2007/SC-2/7 dated 02.11.2007).

(b) Ministry of Railways has revised monthly consolidated remuneration being paid to contract teachers in line with consolidated amount paid to such teachers by Kendriya Vidyalaya Sangthan vide letter no. 11029/39/2011/KVS(HQ)Acad dated 21.03.2013. The honorarium is as under:

(c) Time gap prescribed between two successive contractual appointments of contract teachers for Railway Schools may be reduced from (60) days to one week (07 days) excluding the period of normal vacation, as prescribed in schools calendar. Instead of renewing previous contract, a fresh contract should be signed each time a contract is entered in order to avoid claim of continuous employment/engagement and no reference of the previous contract should be made at the time of signing the new contract. Moreover, in the contract there should be a clear stipulation that they