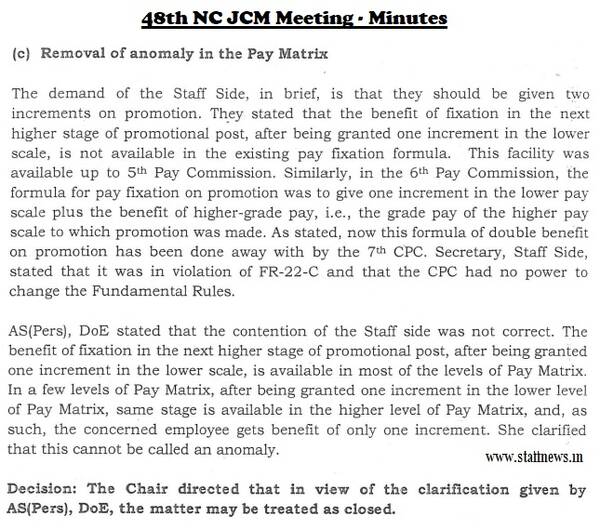 Removal of anomaly in the Pay Matrix and Fixation of Pay on Promotion: Minutes of 48th NC JCM Meeting

Removal of anomaly in the Pay Matrix of 7th CPC: Minutes of 48th NC JCM Meeting Minutes of the Meeting held under the Chairmanship of Secretary (P) o

Removal of anomaly in the Pay Matrix of 7th CPC: Minutes of 48th NC JCM Meeting

The demand of the Staff Side, in brief, is that they should be given two increments on promotion. They stated that the benefit of fixation in the next higher stage of promotional post, after being granted one increment in the lower scale, is not available in the existing pay fixation formula. This facility was available up to 5th Pay Commission. Similarly, in the 6th Pay Commission, the formula for pay fixation on promotion was to give one increment in the lower pay scale plus the benefit of higher-grade pay, i.e., the grade pay of the higher pay scale to which promotion was made. As stated, now this formula of double benefit on promotion has been done away with by the 7th CPC. Secretary, Staff Side, stated that it was in violation of FR-22-C and that the CPC had no power to change the Fundamental Rules.

Must Read: Anomaly in Pay Matrix levels of 7th CPC

Decision: The Chair directed that in view of the clarification given by AS(Pers), DoE, the matter may be treated as closed.

Previous: Item No. NC-48/8/21 (a) Removal of Condition of 3% stipulated to grant Bunching benefits 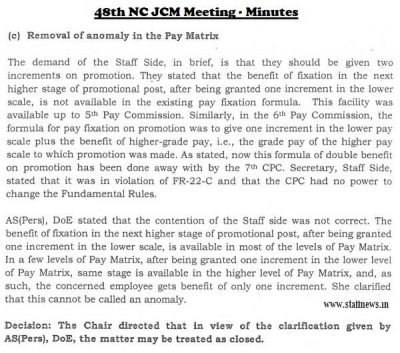