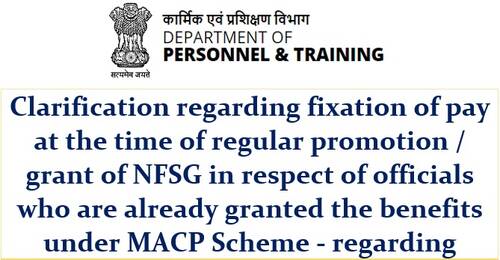 Fixation of pay at the time of regular promotion/NFSG i.r.o. officials who benefited under MACP Scheme: DoPT Reminder-IV

Fixation of pay at the time of regular promotion/NFSG i.r.o. officials who benefited under MACP Scheme: DoPT

Subject: Clarification regarding fixation of pay at the time of regular promotion / grant of NFSG in respect of officials who are already granted the benefits under MACP Scheme-regarding

3. The Cadre Units of CSCS (as per list attached) are once again requested to furnish the requisite data within a fortnight so that this Division may take a final decision in consultation with Estt.(D) regarding recovery of excess amount from the working/ retired persons.

(Bhagirath Jha)
Under Secretary to the Govt. of India

To
Dir/DS(Admn.) of CSCS Cadre
(As per list attached)

Encl:- Fixation of pay at the time of regular promotion/NFSG i.r.o. officials who benefited under MACP Scheme: Clarification by DoPT and seeks data in this regard

Loading...
Newer Post
Haemodialysis of Chronic Kidney Disease Patients: ECHS Order
Older Post
Carry over of All India Leave Travel Concession (AILTC) of a block of Four years to the First year of next block: Clarification by Railway Board RBE No. 83/2021