(iii) Permission to undertake journey to J&K, NER and A&N by private airlines .


2.  The above special dispensation is subject to the following terms & conditions:

(i) All eligible Government servants may avail LTC to visit any place in NERI A&N/ J&K against the conversion of their one Home Town LTC in a four year block.

(ii) Government servants , whose Home Town and Headquarters/place of posting is the same, are not allowed the conversion .

(iii) Fresh Recruits are allowed conversion of one of the three Home Town LTCs in a block of four years , applicable to them.

(iv) Government servants entitled to travel by air may avail this concession from their Headquarters in their entitled class of air by any airlines subject to the maximum fare limit of LTC-80.

(a) Between Kolkata/Guwahati and any place in NER.

(b) Between Kolkata/ChennaiNisakhapatnam and Port Blair.

(c) Between Delhi/Amritsar and any place in J&K.

Journey for these non-ntitled employees from their Headquarters up to Kolkata/ Guwahati/ Chennai/ Visakhapatnam/ Delhi/ Amritsar shall be undertaken as per their entitlement.

(vi) Air travel by Government employees to NER, J&K and A&N as mentioned in para

(iv) and (v) above is allowed whether they avail the concession against Anywhere in India LTC or in lieu of the Home Town LTC as permitted.

(vii) Air Tickets are to be purchased directly from the airlines (Booking counters, website of airlines) or by utilizing the service of Authorized Travel Agents viz. ‘M/s Balmer Lawrie & Company’, ‘M/s Ashok Travels & Tours’ and ‘IRCTC’ [to the extent IRCTC is authorized as per DoPT’s O.M. No. 31011/6/2002- Estt.(A) dated 02.12.2009] while undertaking LTC journey . Booking of tickets through other agencies is not permitted and no request for relaxation of rules for booking the tickets through such agencies shall be considered by this Department.

3. Efforts should be made by the Government servants to book air tickets at the cheapest fare possible. All the Ministries/ Departments are advised to bring it to the notice of all their employees that any misuse of LTC will be viewed seriously and the employees will be liable for appropriate action under the rules. In order to keep a check on any kind of misuse of LTC, Ministries/ Departments are advised to randomly get some of the air tickets submitted by the officials verified from the airlines concerned with regard to the actual cost of air travel vis-a-vis the cost indicated on the air tickets submitted by the officials .

4. In so far as the employees of Indian Audit and Accounts Department are concerned, this order issues after consultation with Comptroller & Auditor General of India.

Sd/-
(Surya Narayan Jha)
Under Secretary to the Govt. of India 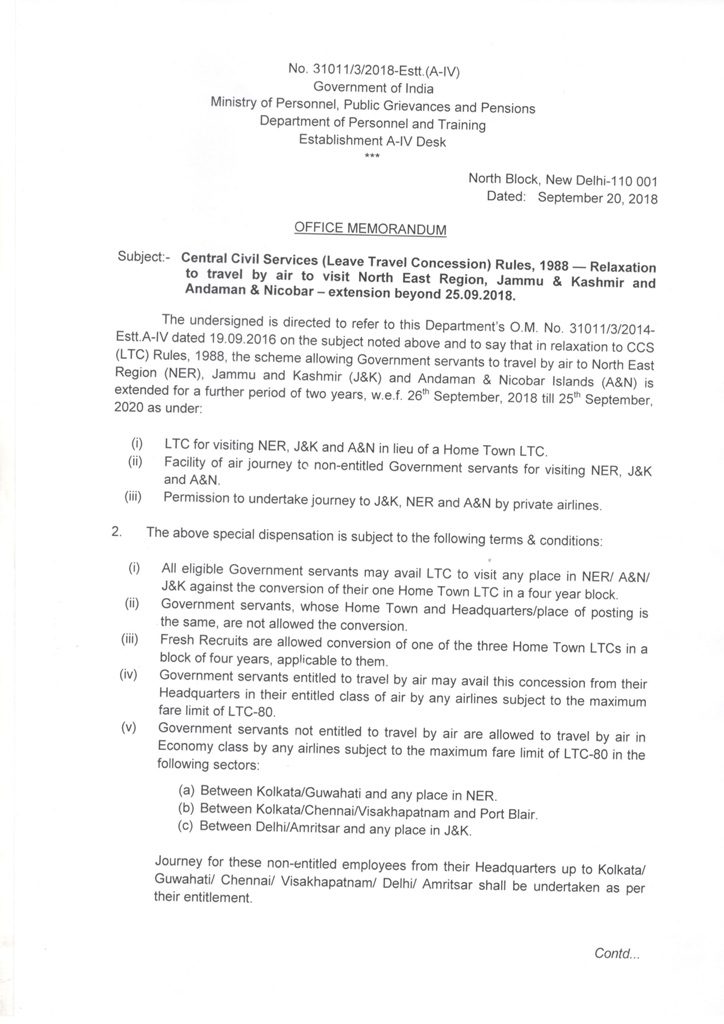 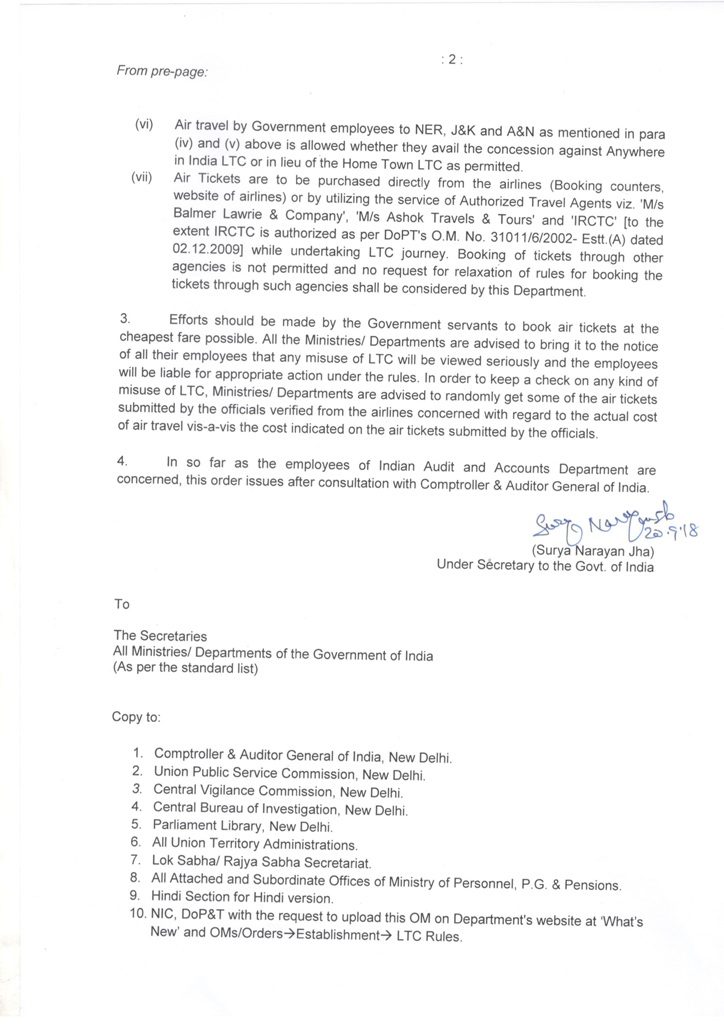