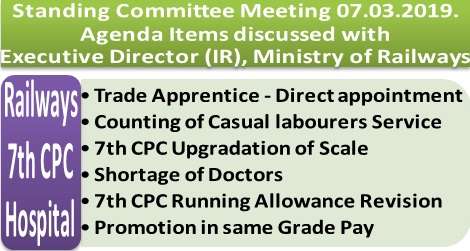 
Joint Secretary (Estt.), DoPT stated that DoPT has taken a decision on the issue of up-gradation of posts of Chemical and Metallurgical Assistant (CMA), Chemical and Metallurgical Superintendent (CMS) and Assistant Chemist and Metallurgist (ACMT) and in this regard, an Inter-Ministerial communication has already been sent. Final decision will be communicated to the Ministry of Railways in due course.
Executive Director (IR), Ministry of Railways informed that the matter will be discussed in the next meeting of Allowances Committee and matter will be resolved.
(xvii) Item No.35 : Acute shortage of doctors in the Railways – Failure of the UPSC to nominate doctors in the Railways.
Ed (IR) informed that now situation has improved considerably and in support of his viewpoint, he mentioned data about postings of doctors.
Secretary, Staff Side stated that this issue has been settled and agreed to close the item.
(xviii) Item No.36 : Implementation of Pay Scales recommended by the 7th CPC in case of several other common categories :
Executive Director (IR), Ministry of Railways informed that action on this item will be taken and issue will be resolved within next 6 months.
(xix) Item No. 37: Recommendations of the 7th CPC on the allowances:
Executive Director (IR), Ministry of Railways stated that recommendations in respect of the allowances; viz. Special Train Controllers Allowance to Train Controllers, Risk and Hardship Allowance to Track Maintainers (except additional allowance to Running Staff in Railways) have been accepted by the Government and orders in this regard have been issued by the Ministry of Railways.
Joint Secretary (Personnel), Department of Expenditure stated that a meeting would be called for in the near future, to consider the issue of grant of additional allowance to Running Staffs of Railways and a decision will be taken, at the earliest.
(xx) Item No.46: Fixation of pay on promotion to a post carrying higher duties and responsibilities but carrying same grade pay:
Secretary, Staff Side stated that in the Ministry of Railways it has been seen that in case of promotion of Loco Pilot (Goods) to the post of Loco pilot (Passenger), and Loco pilot (Passenger) promoted to Loco pilot (Mail/Express), and Passenger Guard promoted to the post of Mail/Express Guard are placed in Pay Band II with Grade Pay Rs.4200/- in the revised pay structure w.e.f. 1.1.2006 onwards. The benefit of the promotional pay fixation to the above category of staffs may be extended by the Ministry of Railways.
(xxi) Item No.49: Inadequate medical facilities & conditions imposed for recognition of Referral Hospitals by the Indian Railways :
Secretary, Staff Side stated that since Railway Board has delegated the powers to the General Managers/DRM’s/CWM, to empanel private hospitals as per need basis, the item may be considered as closed.