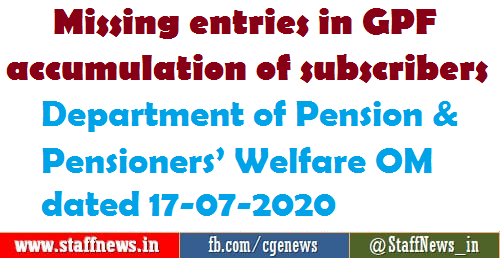 This office has been receiving grievances from retired government servants for inaccurate and delayed GPF settlement, along with interest, on their retirement, due to frequent instances of missing credits in their GPF accounts. The missing credits in GPF were reported mostly by subscribers, who during their service moved from one establishment to another or were assigned foreign deputation and also by officers of All India Service, who proceeded on deputation outside their cadres. In these cases it was observed that the GPF account is maintained by an establishment different from that generating their salary bills and deducting their GPF subscription. Needless to say that a co-ordination mechanism between such two establishments is most crucial to avoid any lapses in updated maintenance of GPF accounts.

2. In order to avoid such grievances and for the sake of greater transparency, it has henceforth been decided that,

i. it shall be mandatory for all offices maintaining GPF Accounts to intimate the particulars of missing credits, once every financial year, to the authority responsible for deducting the GPF subscription, under intimation to the concerned subscriber.

ii. A complete statement of all credits, debits and interest, since inception of the GPF account, shall be provided to every subscriber, mandatorily two years before his date of retirement and thereafter one year before the date of retirement. Any subscriber can make a representation on such a statement provided to him and the office maintaining the GPF account shall resolve the grievance within 60 days from the date of receipt of such a grievance.

3. The Administrative Divisions of all Ministries/Department and attached/subordinate offices are requested to bring these instructions to the notice of all concerned for strict compliance.

Rajendra Kumar Dutta
Under Secretary to the Government of India
Tel No. 011-23310106

i. All the Ministries/ Departments, Government of India
ii. Comptroller and Auditor General of India
iii. Controller General of Accounts
iv. All Accountant General (State)
v. NIC, DoPPW: for uploading on website of this Department. 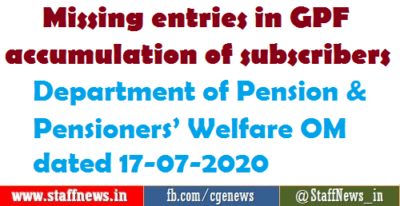