It has been given to Loco Pilot and Mail Guard but not, among other, to shunters and Goods Guard .

Decision in the Meeting of 7.3.2019: Executive Director (IR), Ministry of Railways stated that this item was originated during the 6th CPC and was resolved during the year 2017. Again , this item has been re-opened in 7th CPC.

Ministry of Railways have forwarded the matter to Department of Expenditure, Ministry of Finance for their consideration

It is therefore observed that prima-facie, no anomaly has been brought out in Item No. 46.

This item may be treated as closed.

Discussions/Decision on 26.02.2021: Secretary, Staff Side stated that there are various trades in which the benefit has been given. However, still there are some categories where, even though higher responsibilities are involved, the benefit of pay fixation has not been given. The Ministry of Railways stated that the Department of Expenditure and DoPT have not permitted them to do so.

AS(Pers), DoE stated that this is an internal matter of the Ministry of Railways and they can take a decision, on their own, in the matter. 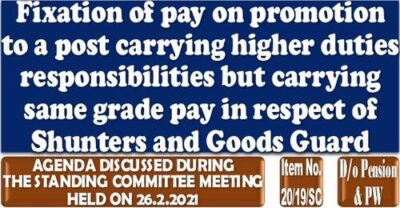 Reimbursement of expenses on purchase of Hearing Aids – Revision of rate & guidelines: Railway Board Order

Ayub Mugal: Send me link form "IAFA-381" declaration of heairship on nomination or will or administration

Chintamani Subbarayappa Nagaraja: When unorganised sectors like small business mens are getting 5000/as monthly pension.where as we organised sector employees,who worked for the establishments and public services,and rendered their full services and retired and getting Rs 1000/pm where is justice

K Venugopal: EPFO 95 is not solved to revise enhanced pension to employees of private organisations. Supreme court is delayed this matter by nominating a team to go through the issue. They are sleeping. Pensioners are dying due to lack of money to eat and medical expenses to meet with the mere pension of ₹1000. If supreme court is really want to solve this matter? When previous hearing some six months before a justice directed the PF authorities and official to discuss daily and quickly conclude this issue. But now a committee formed. Now it has enough time like previous committees Sarkaria, Shaw committees. The person who gave the idea will face the curse of age old people, who deprived off hard earned money.

Missing Immovable Property Returns of IAS officers, if any, from 01.01.2011 onwards: Clarification by DoP&T

Promotions to Group ‘B’ posts on Indian Railways – Pattern, Syllabus, Schedule for LDCE through CBT

Review of cost of Housekeeping of Trains & Stations – Clarification