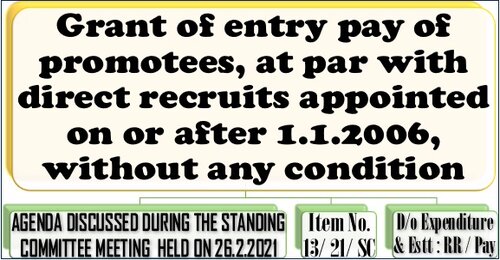 Grant of entry pay of promotees, at par with direct recruits appointed on or after 1.1.2006, without any condition

Grant of entry pay of promotees, at par with direct recruits appointed on or after 1.1.2006, without any condition

Brief: Grant of entry pay of promotees, at par with direct recruits appointed on or after 1.1.2006, without any condition.

(a) It is mentioned that the instant matter contained m Agenda Item No. 13 relates to Deptt. of Expenditure’s (DoE) 0.M. dated 28.09.2018 wherein benefit of entry level pay for direct recruits have been allowed m case of promotion in grades where there is an element of Direct Recruitment Estt.(D) Branch deals with ACP/MACP Scheme. However, it has been decided to extend the benefit allowed under DoE’s O.M. No . 8-23/ 2017-E.IIIA dated 29.09.2018 by allowing refixation of pay of employees under MACP Scheme and clarification has been issued vide DoP&T’s O.M. No . 35034/3/2015-Estt.( D) dated 08.09.2020 m consultation with DoE.

(b) The Staff Side have now requested that entry level pay should be allowed in all cases of promotion irrespective of whether there is any element of direct recruit or not. Therefore , it is for DoE to consider the request of the Staff Side. If, any modification m above DoE’s 0.M. dated 28.09.2018 is made by DoE, its implication on MACPS would be examined and if need be necessary clarification under MACP Scheme will be issued by Estt. (D) at that stage. Hence, no action is called for from Estt.(D) on the above agenda item at this stage.

Establishment Pay Division, DoPT informed through their letter dated 23.02.2021 that the Staff Side pointed that D/o Expenditure vide OM dated 28.09.2018 allowed grant of higher Entry Pay to the promotes in some grades subject to the condition that there should be an element of Direct Recruitment in Recruitment Rules of relevant posts. Staff Side claimed that the grades, where there is no element of Direct Recruitment m RRs, are deprived of this benefit. Staff Side accordingly demanded that the condition “element of direct recruitment”‘ in the concerned posts may be deleted and pay of employees promoted to the concerned Grade Pay should not be fixed less than the pay applicable to Direct Recruits. The demand seeks modification of OM issued by D/o Expenditure and needs to be examined by D/o Expenditure.

Decision/ comments in the meeting of 26.2.2021: Department of Expenditure agreed to discuss this issue separately with the staff side. Hence, this item may be taken away from the Agenda of the Standing Committee Meeting. 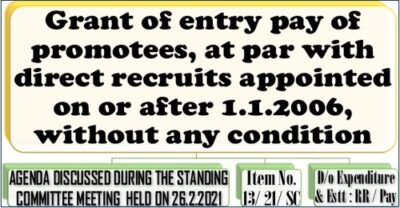 Loading...
Newer Post
Extension of deadline for issuance of manual pass to Railway Employees till 31-05-2021: Implementation of various modules of HRMS
Older Post
Option to switchover to sixth CPC Pay Scale, to those employees, who are subjected to the benefit of entry pay