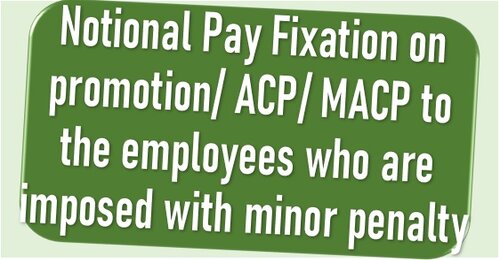 Brief: Notional Pay Fixation on promotion/ ACP/ MACP to the employees who are imposed with minor penalty.

(a) In the maters of disciplinary/ penalty proceedings, grant of benefit under the MACPS are subject to rules governing normal promotion. Such cases are regulated under the provisions of the CCS(CCA) Rules, 1965 and instructions issued there under.

(d) Regulation of pay to the effect of granting notional pay fixation under MACPS/ notional promotion during the currency  of  penalty  is contrary to the extant instructions that the promotion is to be given effect after expiry of the penalty. Grant of notional pay fixation under MACPS on a  date which falls during currency of penalty will have effect of dilution of impact of penalty. As such, it may not be appropriate to accede to the suggestion of the Staff Side.

Decision/ comments in the meeting of 26.2.2021: The Chair agreed to review the same. 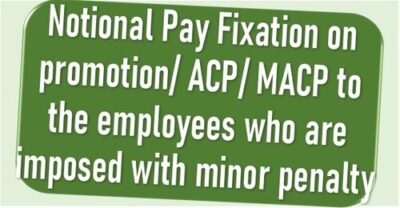 Loading...
Newer Post
Educational Qualification for recruitment of MTS and MTS (Tradesman Mate) in the Ministry of Defence
Older Post
Implementation of awards of Board of Arbitrations, by Government of India: Standing Committee Meeting