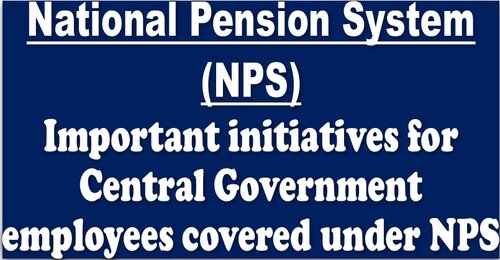 After the enactment of the PFRDA Act, 2013, as per Section 20 of the Act, the pension scheme notified on 22.12.2003 has become the National Pension System under the Act. NPS is now regulated under PFRDA Act, 2013 and regulation framed thereunder by Department of Financial Services and PFRDA

(A) Initiatives by Department of Pension and Pensioners’ Welfare:

(B) Initiatives by Department of Financial Services:

(C) Initiatives by Department of Personal and Training :

(D) Initiatives by Ministry of Health and Family Welfare:

(i) Minimum years of qualifying service for eligibility of CGHS membership after retirement- 10 years.

(ii) No minimum qualifying years of service for availing CGHS facilities in case of. death/disability.

(iii) Other conditions such as definition of family, CGHS contributions, conditions of dependency etc will be applicable as per existing rules.

Compendium of Seventh Pay Commission Allowances by Ministry of Railways

M satyanarayana: Dear sir all departments discussion was there regarding hospital staff who are joined as group d category now elegible for clerk cader those who are promoted as dresser not having 4200 gp and not eligible for change of dept also even after pay commission orders to implement 2000/gp is not followed all other central government hospital this designation is not there if you search the meaning of dresser in locol language can you get different meaning it should be changed to ot assistant 3/2/1 like other departments it is better I request sirf and nfir leaders sir please try to achieve better promotional prospects for educated staff of medical dept after attaining certain service we are having some qualification relaxation like other dept is better in medical dept only the qualification which is following RRB recruitment is followed those who are having qualification other than medical will acquire practical knowledge in this dept consider for promotion this will help incumbents as well as dept to provide better service to the railway men and their families thankyou