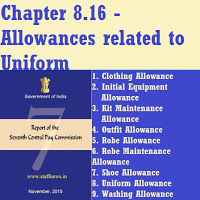 8.16.2 Officers of uniformed forces are in receipt of a Uniform Allowance that is in the nature of an initial grant followed by a renewal grant every three years. Personnel of the Customs Department and deputationists in the Bureau of Immigration get an initial grant and a renewal grant every year. SPG personnel are granted an identical sum of money every year. The existing structure is as under:
8.16.3 IB personnel posted at high altitudes are granted a Clothing Allowance at the following rates:
8.16.3 An Initial Equipment Allowance is granted to the personnel of Central Excise and Narcotics Department – CBEC, Department of Revenue, Ministry of Finance at the following rates:

8.16.4 Officers of Indian Foreign Service and certain employees in Ministry of External Affairs are granted an Outfit Allowance to meet the expenditure involved in clothing required for living abroad. The allowance is granted every time the officer is posted abroad plus once in HQ, but not more than 8 times in the whole career. The existing rates are as under:

8.16.5 A Robe Allowance is granted to meet the uniform related requirements of ICLS officers and legal officers in NIA who are required to appear before courts. The existing rate is Rs.2,500 (payable every 5 years) in ICLS and Rs.5,000 pa in NIA.

8.16.9 Besides the general demand for increase in rates, there are requests for reducing the period of renewal grant from the current gap of three years because the uniforms do not last that long. It has been stressed that Uniform Allowance should be added to the salary as and when it becomes due, instead of having to claim it as required at present.
8.16.10 PBORs have strongly sought for grant of an allowance in lieu of uniforms (as is given to their officers) on the grounds that uniforms are not supplied in time, sizes are based on averages and are therefore not usually a good fit, quality is sub-optimal, and they often end up spending from their pockets to make the necessary adjustments. Strong grievance has been made by jawans during field meetings with the Commission including poor quality of shoes which sometimes don’t fit and do not last for more than three months, thereby causing serious hindrance in their performance of duties.
Analysis and Recommendations

8.16.11 Uniforms are an essential functional requirement. Hence the need for provision of the same, either in kind or cash, is well recognized. However, the mode of provisioning should be simple and easily implementable in the field.
8.16.12 The Commission finds merit in most of the demands raised. The renewal period of three years is, indeed, on the higher side. The reimbursement procedure does need to be simplified.
8.16.13 Grant of Uniform Allowance to PBORs will free them from having to deal with ill-fitting uniforms and enable them to acquire suitable ones, thereby eliminating needless dissatisfaction.
8.16.14 It is thus recommended that uniform related allowances be subsumed in a single Dress Allowance (including shoes) which will be payable at the following rates: