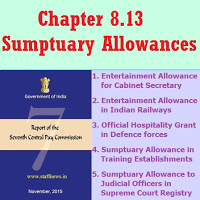 8.13.2 At present, sumptuary allowances are granted to various grades of personnel in the Central Government, to compensate for the expenditure incurred on entertaining visitors.
8.13.3 An Entertainment Allowance of Rs.10,000 pm is granted to Cabinet Secretary to entertain distinguished visitors.
8.13.4 Similar allowance is granted to officers of Indian Railways also, the existing rates of which are as under:
( Rs. per annum)

8.13.5 In the Ministry of Defence, this allowance goes by the name of Official Hospitality Grant, with the following rates:
( Rs. per month)

8.13.6 There exists a Sumptuary Allowance in National/Central Training Establishments for Group `A’ Officers, meant for entertaining small groups of students and faculty. The existing rates are:

8.13.7 Judicial Officers on deputation in the Supreme Court Registry are also granted a Sumptuary Allowance at the same rate as what they were getting in the parent office.

8.13.8 There are general demands for raising the amount of these allowances.

8.13.9 The structure of these allowances is quite haphazard, and the rates vary widely. Moreover, they are paid only in certain ministries, not across the board.
8.13.10 With the rise in pay scales offered by successive Pay Commissions, including the present one, we are of the view that these allowances have lost their relevance. Accordingly, it is recommended that all these allowances should be abolished. Such expenditure on hospitality should be treated as office expenditure and the Ministry of Finance should lay down the ceilings for various levels.