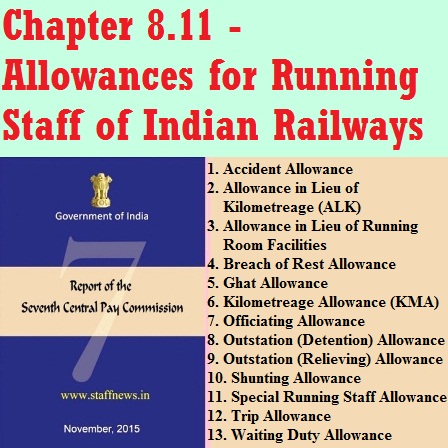 8.11.1 Alphabetical list of Allowances covered here is as under:
1. Accident Allowance

8.11.2 Running Staff of Indian Railways are entitled to “Running Allowance” that includes Kilometreage Allowance (KMA) and Allowance in Lieu of Kilometreage (ALK). Besides these, they are also entitled to some special compensatory allowances, as outlined above. The present dispensation of these allowances is as under:

8.11.3 It is granted to those Running Staff of Indian Railways who are held up at any station other than headquarters due to an accident for a period exceeding 8 hours. If the period of detention < 8 hours, no payment is made, but the period of detention is counted towards hours of duty. Presently the payment is made at the rate of Kilometreage Allowance equal to 70 km for every 24 hour or part thereof, reckoned from time of commencement of detention.

Allowance
in
Lieu
of
Kilometreage
(ALK)

8.11.4 This allowance is granted to running staff of Indian Railways when they are engaged in or employed on non-running duties. The present rates are:

8.11.5 The activities for which ALK is payable are given below:

8.11.7 It is granted to running staff of Indian Railways who are detained for running duties before completion of scheduled Rest Period. It is payable as Overtime Allowance under HOER at the rate of 2 hours for every hour by which rest fall short of prescribed hours of rest.

8.11.8 It is granted to running staff of Indian Railways when operating trains on sections with steep gradient (Ghat Sections). This is granted on the premise that the average speed in Ghat Sections is much lower than non-Ghat sections and therefore the Running Staff operating on Ghat Sections will be put to a disadvantage vis-à-vis their counterpart operating on non-Ghat Sections in terms of Kilometreage Allowance if this allowance is not there. The present rates are:
Kilometreage Allowance (KMA)
8.11.9 It is granted to running staff of Indian Railways for being employed on running duties. This allowance is granted to incentivize more train running
and to compensate the staff for loss of daily allowance, which is not applicable to them. The current formula for the calculation of KMA is as under:

8.11.11 It is granted to runningstaff of Indian Railways when put to officiatein other “running” or “stationery” posts. The present rates are:

8.11.12 It is paid to running staff of Indian Railways when detained at outstations for more than 16 hours from the time they sign off duty. Presently the
payment is made at the rate of Kilometreage Allowance equal to 70 km for every 24 hour or part thereof after expiry of 16 hours from time of ‘signing off.’

8.11.13 It is paid to Running Staff of Indian Railways who are deputed to work temporarily outside their headquarters either on running duties or
stationary duties. When running staff are sent to officiate in higher posts, the allowance shall be paid for 14 days only, and when in the same capacity,
the allowance shall be paid for a maximum period of 2 months. The rate of the allowance is the same as for Outstation (Detention) Allowance for each day
reckoned from the date of arrival at outstation.

8.11.14 It is paid to running staff of Indian Railways working Van Goods trains and Through Goods trains. The present rates are:

8.11.15 Introduced by the VI CPC, this allowance is granted to certain categories of Running Staff in Indian Railways on account of more onerous nature of
work as well as process of selection involved. Dearness Allowance is paid on this allowance. The extant rates are:

8.11.16 It is paid to running staff of Indian Railways working on High Speed Trains from shed to shed. The current rates are:

8.11.17 It is granted to running staff of Indian Railways when on waiting/standby duty as per roster or due to cancellation/detention of train, etc.
Presently the payment is made at the rate of Kilometreage Allowance equal to 15 km per hour up to ten hours.

8.11.18 Both the recognised federations of Indian Railways, viz., All India Railwaymen’s Federation (AIRF) and National Federation of Indian Railwaymen
(NFIR) have requested that “the issue pertaining to payment of Running Allowance(Kilometerage Allowances and ALK) is best left to the Railway Administration,since from time immemorial, the kilometerage entitlements/rates are decided through bi-lateral discussions between Railway Board and Federations.” On the other hand the Ministry of Railway
specifically referred the examination of Running Allowance (RA) to the Seventh CPC for its consideration, vide Letter No.E(P&A)II-2014/Misc.3/7th CPC
of 20.10.2014.
8.11.19 However, subsequently vide letter No.E(P&A)II-2014/Misc.3/7th CPC of 11.05.2015, the Ministryof Railways reverted to the Commission stating
that successive Pay Commissions have “refrained from giving any express recommendations on the methodology/formula for calculation
of
the
rates
of
Kilometreage
Allowance/ALK,
” and “7th CPC may consider to let past practice continue.”
8.11.20 Considering the above, except for the Special Running Staff Allowance, which is covered in the Chapter 11.40, the discussion on these allowances is not included in the report.