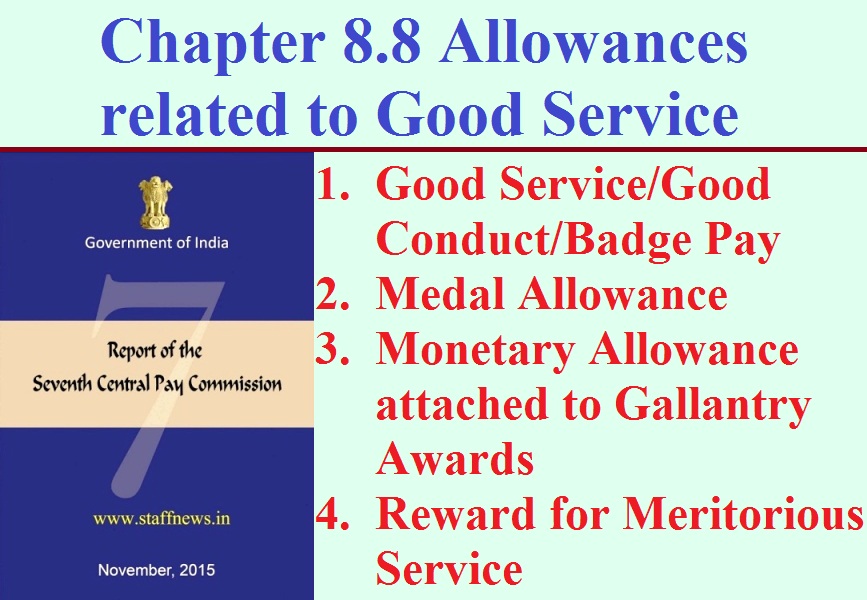 8.8.1 Alphabetical list of Allowances covered here is as under:

8.8.2 This section deals with the allowances granted to personnel of uniformed forces as an acknowledgement of their meritorious service. There are four
such allowances as listed above. These are discussed below seriatim.

8.8.3 PBORs of the three Services are granted Good Service Pay after completion of certain specified length of service during which they have maintained
high degree of discipline, good conduct and professional competence. For PBORs of army, the specified length is 3, 6 and 9 years of service. For PBORs of
IAF and Navy, it is 4, 8 and 12 years of service. For the PBORs of the Indian Army, the existing rate is Rs.64 pm for each of the three stages, while for
the PBORs of Indian Navy and the Indian Air Force, the amount is Rs.80 pm.
8.8.4 While interacting with jawans during its various visits, the Commission noted the sense of prestige and pride attached to this allowance.
Analysis
and
Recommendations

8.8.5 Since the rate is not indexed to DA, it is recommended that it may be increased by afactor of 2.25. The nomenclature should also be changed to Good Service/Good Conduct/ Badge Allowance.

8.8.6 Recipients of certain Gallantry awards, usually personnel of Defence forces, CAPFs and the Indian Coast Guard, are granted a monthly allowance
associated with the award. The rates of Monetary Allowance attached to Gallantry Awards for Defence forces are as under:

8.8.7 The Medal Allowance for personnel of CAPFs and the Indian Coast Guard is given at the following rates:

8.8.8 There are demands for a four-fold increase in the rates of these allowances.


8.8.9 The VI CPC had suggested that the Central Government should revise the rates of these Gallantry Awards on their own without waiting for a Pay
Commission. Accordingly, the last revision of rates for Defence forces was done on 30.03.2011. No change in rates is therefore proposed.
8.8.10 It is, however, pointed out that monetary allowance associated with President’s Tatrakshak Medal (granted to Coast Guard personnel) is Rs.1,500 pm,
while that for President’s Police Medal for Gallantry (PPMG) is Rs.3,000 pm. Similarly, the allowance associated with Tatrakshak Medal is Rs.900 pm, while
that for Police Medal for Gallantry (PMG) is Rs.2,000 pm. This discrepancy may be set right and amounts for President’sTatrakshak Medal and Tatrakshak Medal increased to Rs.3,000 pm and Rs.2,000 pm respectively.

8.8.11 This reward is granted to PBORs who have put in 15 years of meritorious service. The present rates are as follows:

8.8.12 Defence forces have asked for a four-fold raise in the amount.