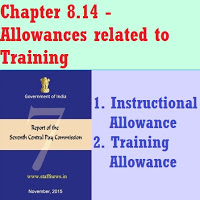 8.14.1 Alphabetical list of Allowances covered here is as under:
1. Instructional Allowance
2. Training Allowance

8.14.2 There are two allowances that are granted to employees who proceed on deputation to academic institutions as faculty members: Training Allowance for civilian employees and Instructional Allowance for Defence employees.
8.14.3 Training Allowance is paid as a percentage of Basic Pay–30 percent in the National/Central Training Academies and Institutes for Group `A’ officers and 15 percent in other training establishments.
8.14.4 Instructional Allowance, on the other hand, is paid as a lump sum monthly amount as per the following rates:

8.14.5 Thereis a strong demand from Defence forces to extend Training Allowance to Defence personnel in lieu of Instructional Allowance. Indian Coast Guard has also represented on similar lines.
Analysis and Recommendations
8.14.6 The Commission recognizes the need for an appropriate incentive to attract talented individuals from the field to academic institutions for imparting quality training. At the same time, this enticement should not be so lucrative that employees do not want to go back to the field.

8.14.8 In consonance with our general approach to rationalize the percentage based allowances by a factor of 0.8, the rates of Training Allowance should be revised as follows:

8.14.9 Training Allowance is a means to attract talented individuals from the field to impart knowledge and share their experiences with others. Hence,it will be admissible only to the employees who join the training establishments for a specified period of time and are then likely to go back. It will not be admissible to those employees who are directly recruited by such training establishments for imparting training.