New Delhi, the 5th September, 2016
No. 01(E).— 1. The Seventh Central Pay Commission (CPC) was set up by the Government of India vide Ministry of Finance (Department of Expenditure) Resolution No. 1/1/2013-E.III(A,) dated 28th February, 2014. The Commission submitted its report on 19thNovember, 2015. The report covered among other things, matters relating to structure of emoluments, allowances and conditions of service of Armed Forces personnel. Government has given careful consideration to the recommendations of the Commission relating to these matters in respect of Officers of the Armed Forces and have decided that the recommendations of the Commission on the aforementioned matters in respect of these categories of Defence personnel shall be accepted as follows. Some of the major points in respect of Defence Personnel(Officers) are as mentioned below:-
(i) Implementation of the revised pay structure will be w.e.f 01.01.2016;
(ii) Pay related Matter;
a) The existing system of Pay Band and Grade Pay has been replaced with separate Pay Matrices for both Defence and Military Nursing Services personnel.
b) Fixationof pay of each employee in the new Pay Matrix as on 01.01.2016 would be done by multiplying his/her basic pay by a factor of 2.57.
Note-1 With regard to fixation of pay in the new Pay Matrix as on 01.01.2016, the existing pay (Pay in Pay Band plus Grade Pay) in the pre-revised structure as on 31.12.2015 shall be multiplied by a factor of 2.57. The figure so arrived at is to be located in the Level Corresponding to employee’s Grade Pay in the new Pay Matrix. If a Cell identical with the figure so arrived at is available in the appropriate Level, that Cell shall be the revised pay; otherwise the next higher cell in that Level shall be the revised pay of the employee.
Note-2 After fixation of pay in the appropriate Level as specified in Note-1 above, the subsequent increments shall be at the immediate next Cell in that Level.
c) General recommendations on pay recommended by the Commission have been accepted with the following exceptions in Defence Pay Matrix, namely:
i. The index of Rationalisation of Level 13A (Brigadier) in Defence Pay Matrix may be revised upward from 2.57 to 2.67.
ii. Additional 3 stages in Levels 12A (Lt. Col), 3 stages in Level 13 (Colonel) and 2 stages in Level 13A (Brigadier) may be added appropriately in the Defence Pay Matrix.
(iii) Increase in Military Service Pay (MSP) of Officers Rank from Rs. 6000/- to Rs. 15500/- p.m. and for Military Nursing Service (MNS) Officers from Rs 4200/- to Rs 10800/- p.m. MSP would be counted only for Dearness Allowance (DA) and Pension purposes;
(iv) Therewill be two dates for grant of increment viz. 1st January and 1st July of every year, instead of existing date of 1st July. However, an employee will be able to avail annual increment only on one of these two dates depending on the date of appointment, promotion or grant of financial upgradation;
(v) Recommendations on Allowances (except Dearness Allowance) would be referred to a Committee comprising Finance Secretary & Secretary (Expenditure) as Chairman and Secretaries of Home Affairs, Defence, Health & Family Welfare, Personnel and Training, Posts and Chairman, Railway Board as Members. The Committee would submit its report within a period of 4 months. Till a final decision on Allowances is taken based on the recommendations of this Committee, all Allowances would continue to be paid at existing rates in existing pay structure, as if the pay had not been revised w.e.f. 1.1.2016 i.e. , status quo would be maintained;
(vi) Arrears of Pay would be paid during the current financial year;
(vii) Recommendations not relating to pay and allowances and other administrative issues specific to department/ cadres/ posts would be examined separately as per the Transaction of Business Rules/ Allocation of Business Rules.
2. Other instructions on Pay Fixation and increment not specifically covered in these instructions will be as in the Government of India, Ministry of Finance (Department of Expenditure) Resolution 1-2/2016-IC dated 25th July, 2016.
3. The decisions taken by the Government accordingly on various recommendations of the Commission in respect of Officers of Armed Forces are indicated in the statement at Annexure-I to this Resolution.New Pay Matrix for Defence Service Officers is at Annexure-II and for MNS Officers is at Annexure-III.
[No. 1(6)/2016/D (Pay/Services)]
ANANDARAJAN, Jt. Secy.
Annexure – I 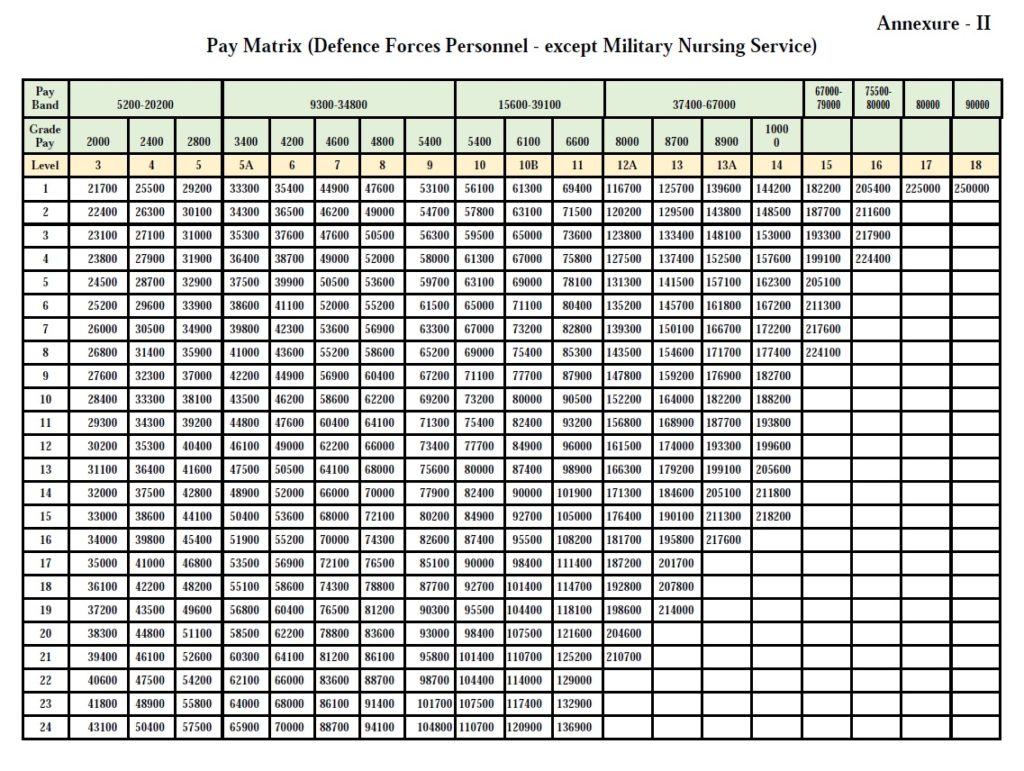 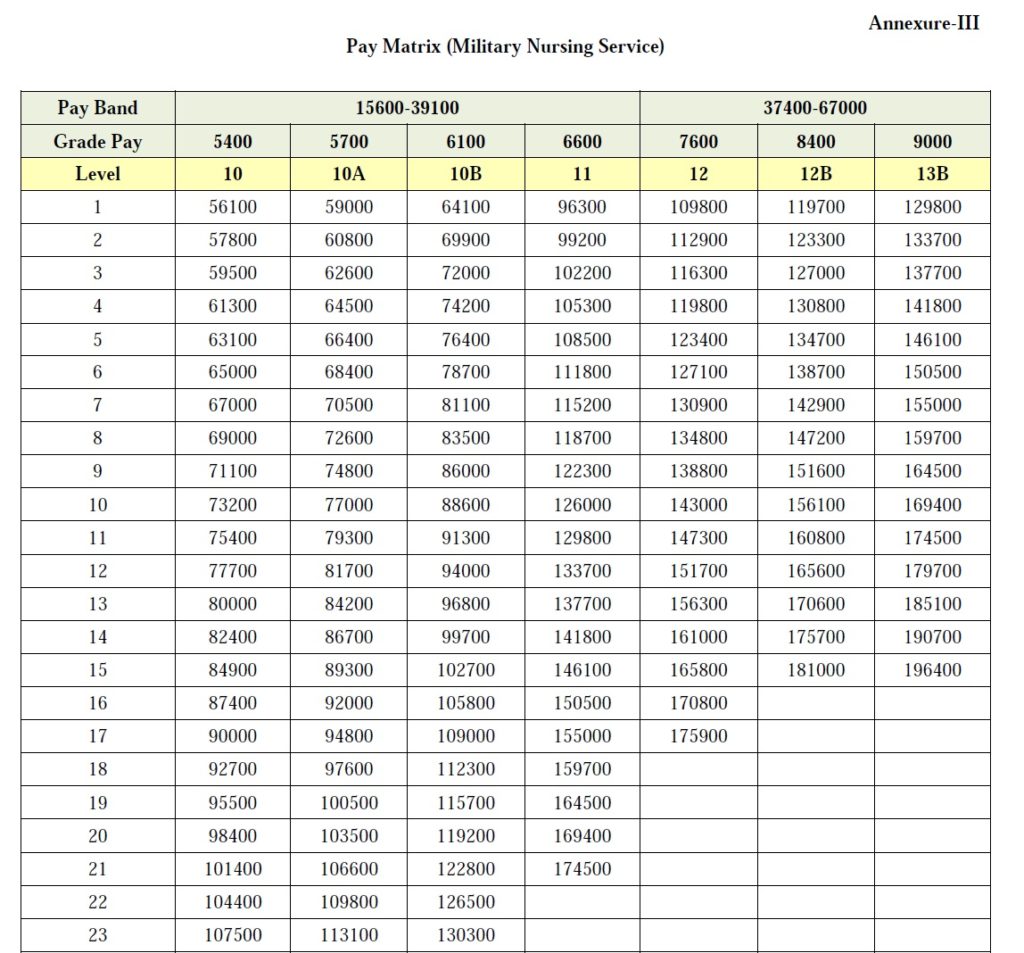